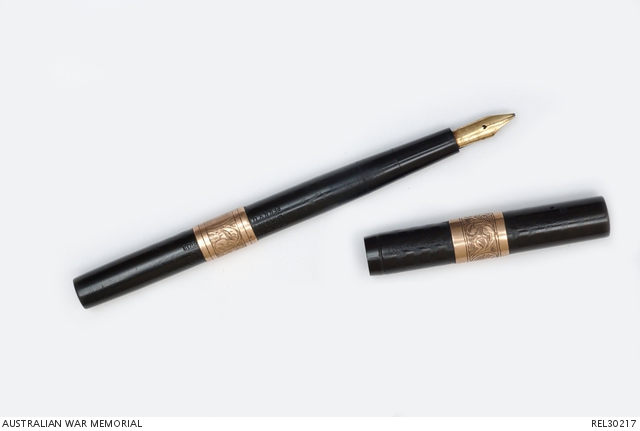 Waterman fountain pen purchased in Cairo, Egypt on 31 August 1915 by (then) Lance Corporal Sydney Stockham. The pen is made of black bakelite with an incised pattern of irregular bands. There is an engraved decorative 14 mm rose gold band around the cap, and a similar band around the body. A hole in the cap indicates that a clip has probably been removed. The gold band on the body obscures three lines of impressed text, which read as follows: 'PAT'D. 188 ... 1899 WATERMAN ... AIN - PEN. N.Y. U.S ... 1903'. The numeral '12' is impressed into the base of the body. The yellow gold nib is impressed 'WATERMAN IDEAL NEW YORK'.

Sydney Clezy Stockham (who appears on the AIF embarkation roll under this name, but on the Nominal roll as 'Sydney Clegg Stockham') was a 25 year old clerk and Sunday School teacher from Fullarton in South Australia when he enlisted as an original member (Private 698) of 27 Battalion in February 1915. By the time the unit embarked on the 'Geelong' in May, he held the rank of Lance Corporal, and his progress through the ranks was steady. His diary mentions that he bought this pen in Cairo on 31 August 1915. After service at Gallipoli, (10 September - 13 December 1915) 27 Battalion was sent to the Western Front in March 1916, and saw action at Pozieres, on the Somme, and in Belgium. Late in the year, Stockham was posted to an instructional position at Etaples, where he remained until early in 1917. He was slightly wounded in the attack on Malt Trench in March, but was back with his unit before the end of the month. In May, Stockham was commissioned in the field as a 2nd lieutenant, (remaining with 27 Battalion) and in October he was promoted to lieutenant, finally being sent to England for officer training in January 1918. He was retained with a training battalion until August, and after returning to France, was attached to Company 'I', 131 US Infantry, assisting the new American troops to gain experience. On 18 August 1918, while observing shell fire from the bank of the Somme Canal, he was wounded in the abdomen by fragments of a shell bursting some 50 yards away, and died later the same day. Sydney Stockham (whose brother Will was also killed while serving with the AIF) is buried at Daours Communal Cemetery Extension, on the Somme in France.