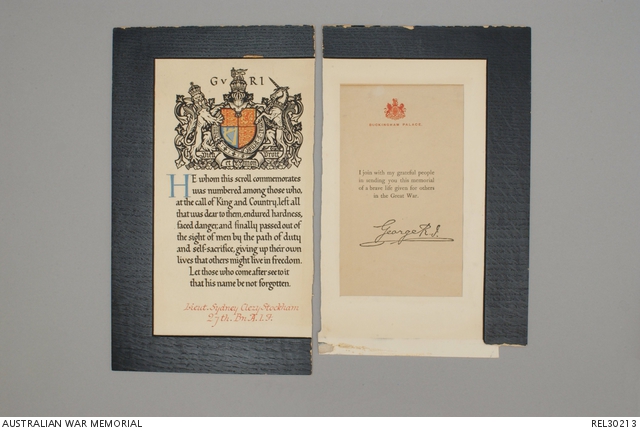 Two certificates relating to the death of Lieutenant Sidney Clezy Stockham. The certificates, which were originally part of a mounted presentation board with his medals and next of kin plaque, are the memorial message from King George V, and the scroll presented to the next of kin of all those servicemen and women killed in the First World War. The message from the King, which would have accompanied the next of kin plaque, reads, beneath a red 'BUCKINGHAM PALACE' letterhead; 'I join with my grateful people in sending you this memorial of a brave life given for others in the Great War.' Below this is the facsimile signature 'George R.I.' The scroll features the Royal coat of arms with the mongram 'GvRI', and reads 'He whom this scroll commemorates was numbered among those who, at the call of King and Country, left all that was dear to them, endured hardness, faced danger, and finally passed out of the sight of men by the path of duty and self-sacrifice, giving up their own lives that others might live in freedom. Let those who come after see to it that his name be not forgotten.' Below this, in red ink, is hand written the name of the recipient 'Lieut. Sydney Clezy Stockham 27th. Bn. A.I.F.' Both certificates are partially attached to mounting board and black matte board.

Sydney Clezy Stockham (who appears on the AIF embarkation roll under this name, but on the Nominal roll as 'Sydney Clegg Stockham') was a 25 year old clerk and Sunday School teacher from Fullarton in South Australia when he enlisted as an original member (Private 698) of 27 Battalion in February 1915. By the time the unit embarked on the 'Geelong' in May, he held the rank of Lance Corporal, and his progress through the ranks was steady. After service at Gallipoli, (10 September - 13 December 1915) 27 Battalion was sent to the Western Front in March 1916, and saw action at Pozieres, on the Somme, and in Belgium. Late in the year, Stockham was posted to an instructional position at Etaples, where he remained until early in 1917. He was slightly wounded in the attack on Malt Trench in March, but was back with his unit before the end of the month. In May, Stockham was commissioned in the field as a 2nd lieutenant, (remaining with 27 Battalion) and in October he was promoted to lieutenant, finally being sent to England for officer training in January 1918. He was retained with a training battalion until August, and after returning to France, was attached to Company 'I', 131 US Infantry, assisting the new American troops to gain experience. On 18 August 1918, while observing shell fire from the bank of the Somme Canal, he was wounded in the abdomen by fragments of a shell bursting some 50 yards away, and died later the same day. Sydney Stockham (whose brother Will was also killed while serving with the AIF) is buried at Daours Communal Cemetery Extension, on the Somme in France.