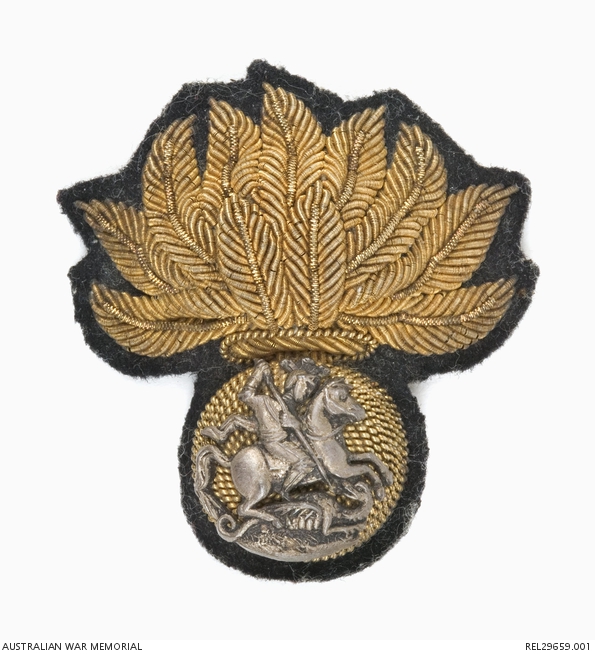 'Flaming bomb' badge in gold bullion on a black cloth backing. Attached to the front of the circular 'bomb' is a cast silver figure of St George on horseback slaying the dragon. The badge is associated with a numeral '5', also in gold bullion (REL29659.002).

Henry Evelyn Woodville Preston obtained his commission, by purchase, as an Ensign in the 50th (Queen's Own) Regiment of Foot on 9 November 1855. At that time his regiment was on active service in the Crimea. The 50th returned from these duties in August 1856, and embarked for Ceylon on 30 June 1857. In 1858 Preston qualified as regimental instructor of musketry, and on 11 February 1859 was promoted lieutenant. In 1863 the 50th Foot was sent to New Zealand following the outbreak of further fighting with the Maoris. Preston was present with the regiment when it disembarked at Auckland on 15 November 1863, and it is further recorded that he was present during the assault and capture of Rhagiawhia on 21 February 1864. Following service in New Zealand the 50th Regiment was sent to New South Wales to reinforce local defences. Preston accompanied his regiment and was stationed at Victoria Barracks, Sydney, for three years. In 1869 the regiment returned to England and on 1 April 1870 Preston was promoted Captain and placed on half pay. In 1875 he was appointed to the 5th Northumberland Fusiliers, joining that regiment in India. The following year he returned to England on account of his wife's ill health and retired from the Army by sale of his commission. He had completed over 20 years service. A handwritten account of Preston's life after leaving the Army states that, with his wife, he returned to Australia in 1877 with a view to obtaining employment in the local Defence Forces, but failed to gain a suitable appointment. In 1882 his wife died. In 1883 Preston was appointed a Justice of the Peace. He also sat on the bench of the Water Police Court for more than two years in an attempt to qualify for the position of a Police Magistrate, but failed. He later unsuccessfully sought the position of resident magistrate of Norfolk Island, and of visiting magistrate of Lord Howe Island. Preston died in Sydney in 1905.