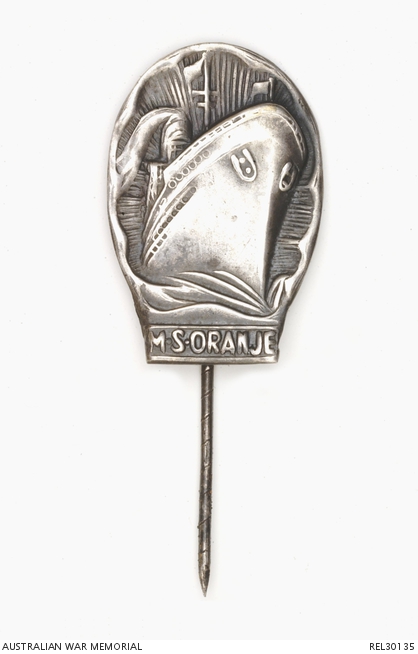 Silver lapel pin with the image of a ship above the words 'MS.ORANJE'. A stick pin is attached to the reverse.

Worn by 475033 Able Seaman Nicolaas Paulus Hendrick Hutteman of the Dutch Merchant Navy. Hutteman was born in 1923 in Amsterdam and joined the Merchant Navy in 1939. In November 1940 he signed on 1st Netherlands Military Hospital Ship MS Oranje in Soerabaya in the Netherlands East Indies (NEI). On his second voyage the ship was involved in transporting wounded Australian and New Zealand soldiers home from the Middle East. The Oranje arrived in Sydney, the ship's new home port, on 12 December and Hutteman was issued with the Commonwealth of Australia Alien Seaman registration number 26873. During this period the crew of the Oranje would often gather at one of the Repin's coffee shops in Sydney, as the cafe had the reputation of having the best percolated coffee. Hutteman and fellow crew members became friends with one of the waitresses, Una Patricia Davies and when in port members of the crew, including Hutteman, would go to Epping and spend time with the Davies family. Nicolaas and Patricia conducted a courtship by letter between visits and were married in September 1942. Continuing his service with the Merchant Navy on various ships, Hutteman sailed on voyages to the Middle East, United Kingdom, Italy and the United States. He rejoined Oranje in August 1945 and undertook four voyages between the Far East, Colombo, New Zealand and the UK. He returned to the NEI and was involved in the repatriation of prisoners of war. During his service on Oranje he was engaged in one voyage to France with German and Italian POWs for exchange with Australian and New Zealand soldiers. He was also on the Oranje when it brought the first group of POWs from Singapore to Australia. On 26 June 1946 he was discharged from the Merchant Navy in Tandjong Priok. He arrived in Sydney aboard a Royal Dutch Navy DC 3 to join his wife and two young daughters.