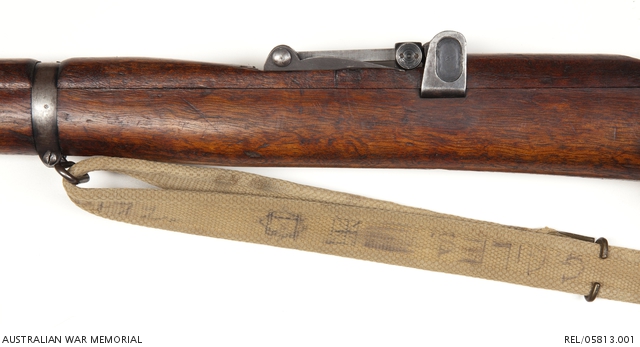 Short Magazine Lee-Enfield No 1 Mk III* bolt action rifle. Action stamped LITHGOW S.M.L.E. III* 1917 under the bolt arm with 3MD 49011 and the serial number on the knox form. The butt is stamped CMF over 3MD 49011 and 11/17. The rifle is complete but the firing pin has been replaced with one that has a broken striker.

It is part of the equipment carried by Private G J Giles, 29 Battalion, AIF as he came out of the line on his way to rest after a week on the front line at Morlancourt during July 1918.
This exceptionally rare collection of Private Giles equipment and personal effects was collected the Official Australian War Correspondent and founder of the Australian War Memorial, Dr. Charles Bean. It is the only known complete set of authentic uniform, equipment, weapon and personal effects of one single known combatant from any nation involved in the First World War.