Group portrait of crew of 466 Squadron RAAF under the nose of their Wellington aircraft 'Y' ... 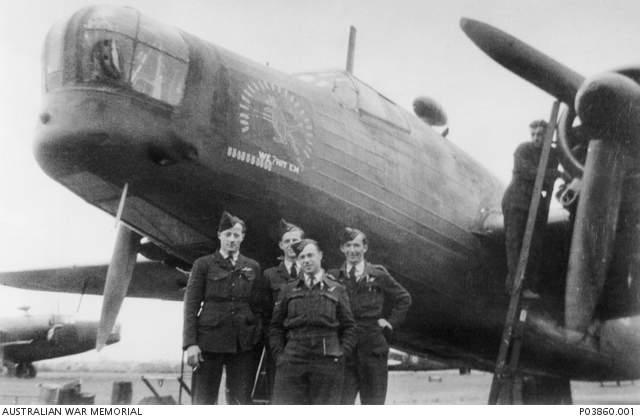 Group portrait of crew of 466 Squadron RAAF under the nose of their Wellington aircraft 'Y' Yorker, around the time of the Hamburg raids. Identified, left to right: Geoff Coombes, Pilot; 414121 Pilot Officer (PO) Leslie Dean (Les) Anderson, Navigator of Toowoomba, Qld; 409617 PO Clifford John (Cliff) 'Butch' Trotman, Rear Gunner of Essendon, Vic; Peter Balderston, Wireless Operator. Ron Last RAF, Bomb Aimer, was not present. Note the nose art of a kangaroo surrounded by 52 bombs, indicating the number of raids flown by this aircraft The kangaroo is 'depositing' three bombs and the wording reads 'We ?hit'em'. The squadron converted to Halifax aircraft at the end of August 1943, requiring two extra crew. Another two Englishmen, Roger Nelson, Mid Upper Gunner, and Jackie Causier, Flight Engineer joined this crew. They were shot down over Berlin on the night of 28-29 January 1944, resulting in the death of Anderson, Trotman and Nelson. The aircraft was also carrying Doug Hughes, a 'Second Dickie', the name given to a pilot flying to obtain experience on his first operation before receiving his own crew. Balderston escaped from the damaged aircraft and managed to evade the fires burning all around, landing through the slate roof of a house. He was captured after he had come out of the building and taken to a police station where a nurse dressed his facial and leg wounds. He and 60 other airmen were taken by cattle truck to Frankfurt Dulag Luft where he remained for questioning for two weeks. He subsequently spent time in Prisoner of War (POW) camps at Sagan, Heydekrug, Thorn and Fallingbostel. Before he could be liberated, he and other POWs were forced to leave camp and march for about six weeks, during which time they were shot at by British Typhoon aircraft near Gresse, causing approximately 50 casualties. The group finally met up with the some British tank crews who told them to make for Luneburg from where he was repatriated.