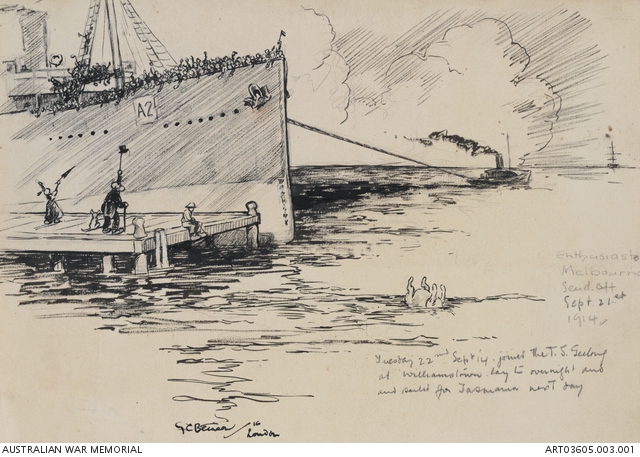 Depicts the troopship 'Geelong' loaded with troops departing from the pier at Williamstown,Victoria, being pulled away from the pier by a tug boat. An old man leans on a walking cane and holds his top hat aloft another cane to bid his farewell while his canine companion sits patiently on the pier beside him. A woman throws both arms in the air, one waving her umbrella in an enthusiastic gesture of farewell, while a lone fisherman dangles his feet over the edge of the pier nonchalantly, seemingly oblivious to fanfare behind him. In the Port, an animal floats on its back. Its legs are stiffly suspended in the air, suggesting rigor, as if alluding to the fate awaiting many of the troops. Inscription dates the event pictured as Tuesday 22nd September 1914, indicating that the artist joined the Geelong troopship at Williamstown; they lay overnight and sailed for Tasmania on the Wednesday.