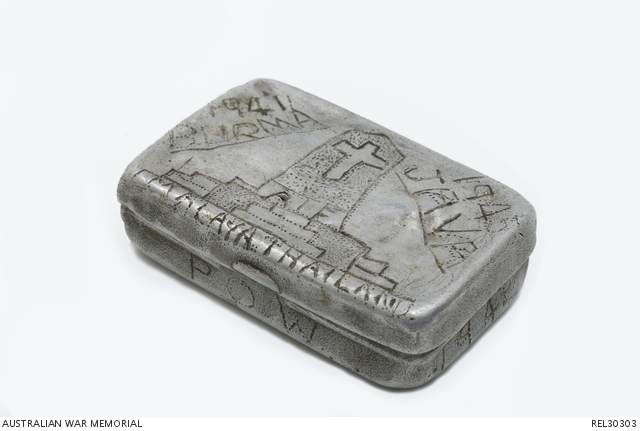 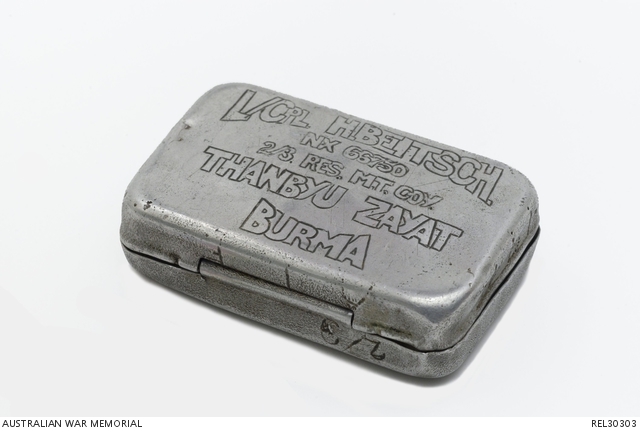 Tin with hinged lid. The lid is engraved with a memorial stone and cross with the letters 'AIF'. In the left corner is engraved '1941 BURMA' and in the right is '1945 JAVA'. Both place names are underlined. Along the bottom edge are the words 'MALAYA/THAILAND'. The bottom of the tin is engraved with 'L/CPL. H.BEITSCH. NX66750 2/3 RES.MT.COY. THANBYU ZAYAT BURMA'. The sides of the tin are engraved from the front around to the right 'POW/1942/2/3 AIF/1945'.

Cigarette tin engraved by NX66750 Hector Beitsch during his internment as a prisoner of war by the Japanese. Beitsch, a mechanic from Bankstown, enlisted on 6 January 1941 after reducing his age by one year to appear 39. He joined 2/3 Reserve Motor Transport Company, serving as a Lance Corporal. After serving briefly in Singapore he was sent to Java on February 1942 and posted as missing in April. He was confirmed as a prisoner of war in September 1943 and spent time in camps in Java, in Burma and Thailand. He returned to Australia in November 1945 and was discharged on compassionate grounds on 20 March 1946.

The tin was originally a "Vetlapdoos" which is a Dutch term translating to 'grease-rag-box'. The aluminum box was used to store the cleaning kit for a rifle and was originally issued to soldiers of the Netherlands East Indies Army, the "KNIL".