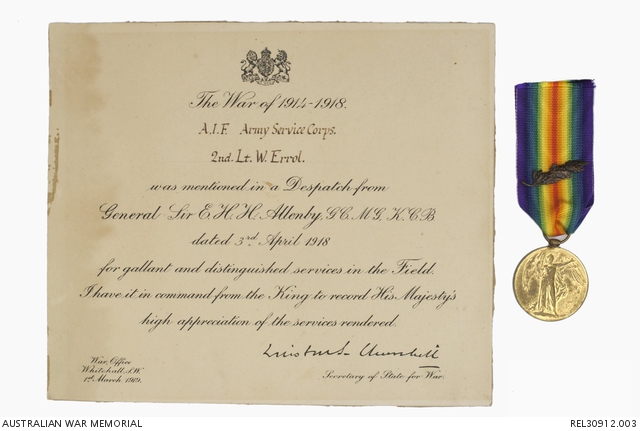 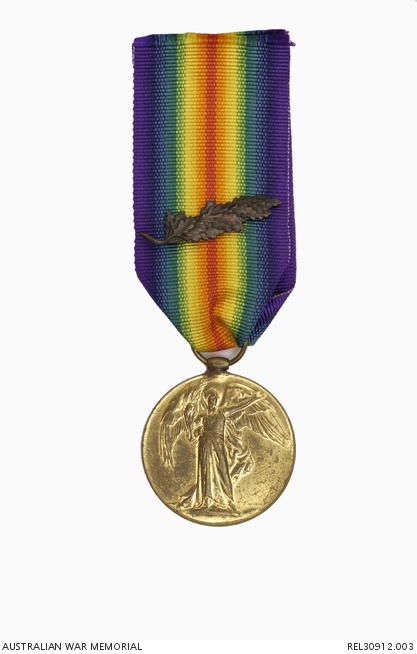 Victory Medal with Mention in Despatches oak leaf. Impressed around edge with recipient's details. Accompanying the medal is an MID certificate, which reads as follows: 'The War of 1914-1918. A.I.F. Army Service Corps. 2nd. Lt. W. Errol. was mentioned in a Despatch from General Sir E.H.H. Allenby, G.C.MG., K.C.B. dated 3rd April 1918 for gallant and distinguished services in the Field. I have it in command from the King to record His Majesty's high appreciation of the services rendered. Winston S. Churchill Secretary of State for War. War Office Whitehall. S.W. 1st March 1919.'

William Henry John Errol was born in London in 1882 with the surname 'Sommerfeld', and was educated at Alleyne's School, Dulwich College. He emigrated to Australia prior to the First World War, and at the same time (c 1910-14) adopted the new surname 'Errol' which he used for the rest of his life. The reason for this change was never revealed, even to his family. In September 1914, as a 31 year old widowed labourer with one son, he enlisted in the AIF, as 'William Errol', becoming Private 5017 in the Australian Army Service Corps. His wartime career was spent in the Middle East, serving in Egypt and in the Sinai and Palestine campaigns. Promotion in the AASC for Errol was rapid - he was made a lance corporal in November 1914, staff sergeant in November 1915, and commissioned 2nd lieutenant in August 1917. By the end of the war, he had reached the rank of captain, and was Mentioned in Despatches in April 1918 for his role as supply officer to the Desert Mounted Corps. William Errol died in Melbourne in 1963.