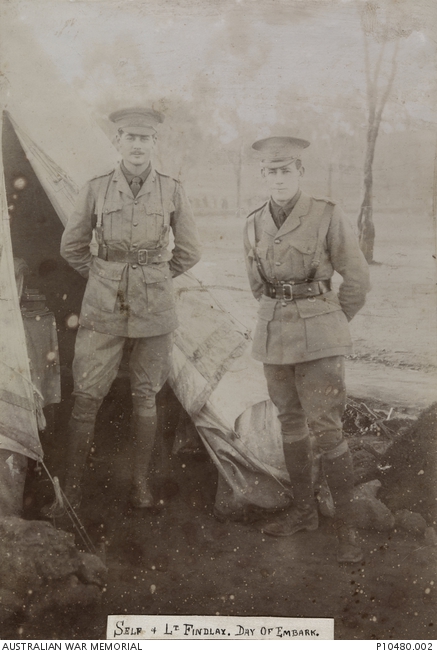 George Lush Finlay was born on 12 October 1891 to William Seymour and Margaret Finlay at Albert Park, Victoria. He received his education at Hawthorn College and became a qualified accountant. On 12 May 1915 he became a commissioned officer in the Australian Imperial Force after training at the Officer's Training School, Broadmeadows. Finlay departed Australia for Alexandria with the 5th Battalion, 7th Reinforcements aboard HMAT Demosthenes on 16 July 1915.

Finlay joined the battalion at Gallipoli but was hospitalised on 18 January 1916 with enteric fever and returned to Australia for three months aboard HS Nestor. Finlay departed Australia again on 28 July 1916 aboard HMAT Themistocles with 5th Battalion, 19th Reinforcements and re-joined his unit on the Somme during October 1916. It was at this time that he was also promoted to lieutenant. Finlay stayed with this unit when they moved to Ypres in 1917 and was awarded the Military Cross for his actions at Ypres on 3 June 1918.

Between January and August 1918, Finlay was attached for duty to the 1st Division Headquarters and 2nd Australian Infantry Brigade. He returned to the 5th Battalion in October 1918 and was promoted to captain on 27 October 1918. Finlay became ill during January 1919and was admitted to the 20th General Hospital with influenza on 4 February 1919. George Lush Finlay did not recover from his illness and died on 9 February 1919 at 20th General Hospital in Camierts, France. He is buried in Etaples Military Cemetery, France.