Wilfred Denver Gallwey was born at Rockhampton, Queensland to William Joseph and Beatrice Amy Gallwey in 1898. Before the war, he served for five years in the Colonial Forces as a senior cadet. Working as a bank clerk, he enlisted on the 7 February 1916 at the age of 18. He was given the service number of 2430 and was initially assigned to the 52nd Battalion as part of the 5th reinforcements. He embarked from Brisbane on 19 September 1916 aboard HMAT Seang Choon.
He disembarked at Plymouth, England on 9 December 1916 and was promoted to Acting Corporal (without pay) on 11 December. He then spent time in England training before he proceeded overseas to France in February of 1917. He was transferred to the 47th battalion on the 7 March 1917. It was as part of this unit that, on 11 April, he took part in the battle of Bullecourt. This event is covered extensively in both his diary and in his letters home. During June 1917, he was promoted to Lance Corporal.
In July 1917, Gallwey became severely ill with trench fever and was transferred to Weymouth hospital in England. Instead of returning to the front line after his recovery, he was sent to Codford for instruction in signalling in November 1917 and received first class honours. He was then selected to become an instructor of signalling, the training for which took until June 1918 when he was transferred to the 15th battalion.
Gallwey spent the rest of the war as a signalling instructor in England. He departed England on 9 March 1919 aboard HT Kashmir and arrived in Australia on the 24 April 1919.
After the war Gallwey resumed his job as a bank clerk and lived in Australia and Fiji. He wrote three large bound volumes of his experiences of the war, based upon his letters and diaries, all three of which were used by CEW Bean to help compile the official history of the battle of Bullecourt.
Gallwey spent the time leading up to the Second World War in London as liaison between the British Ambassador in Berlin and the War Office in London. After spending the war in London, he returned to Australia in 1946.
Wilfred Denver Gallwey died on 27 May 1967 and is interred at Mt Thompson Memorial Gardens, Queensland. 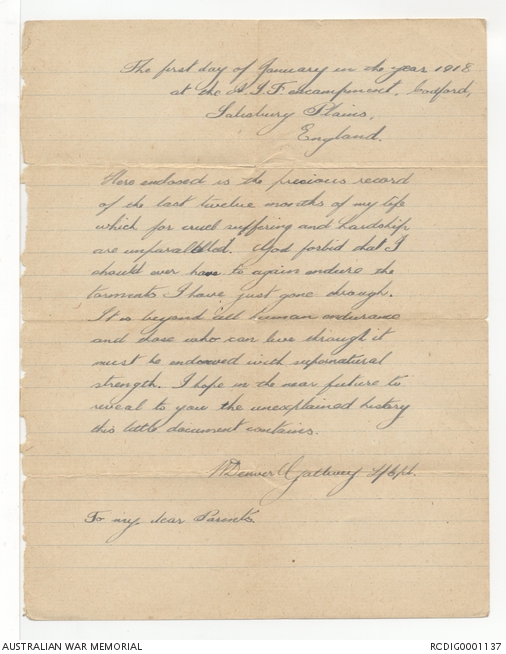 Introductory note to the 1917 letters written by Wilfred Denver Gallwey

Introductory note to the 1917 letters written by Wilfred Denver Gallwey 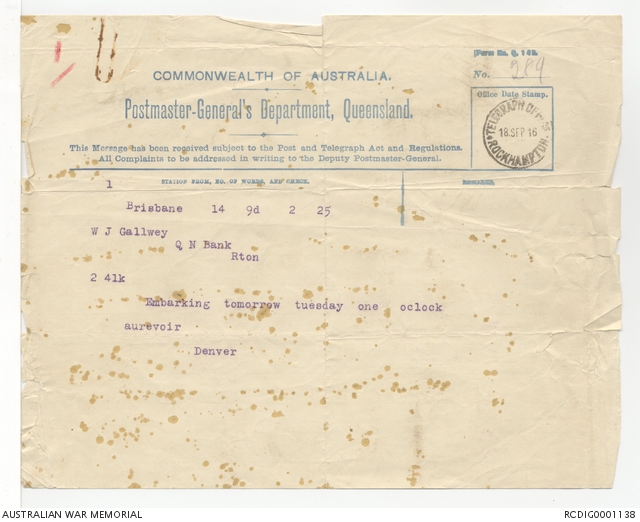 Letters and telegram from Wilfred Denver Gallwey to his family, 1916

Letters and telegram from Wilfred Denver Gallwey to his family, 1916 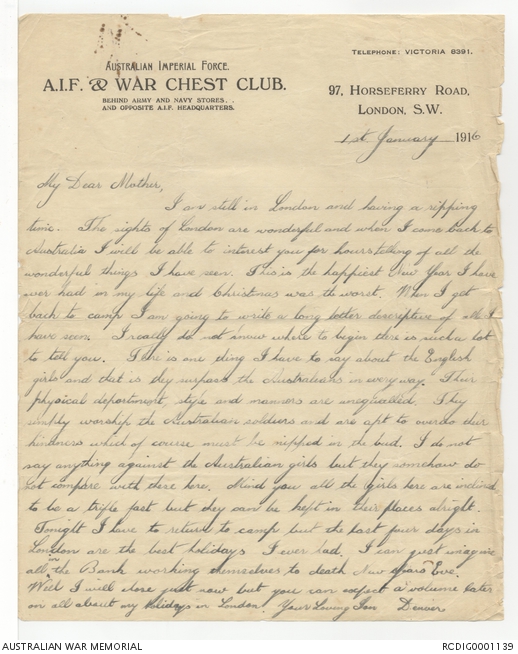 Letters from Wilfred Denver Gallwey to his family, January to July 1917