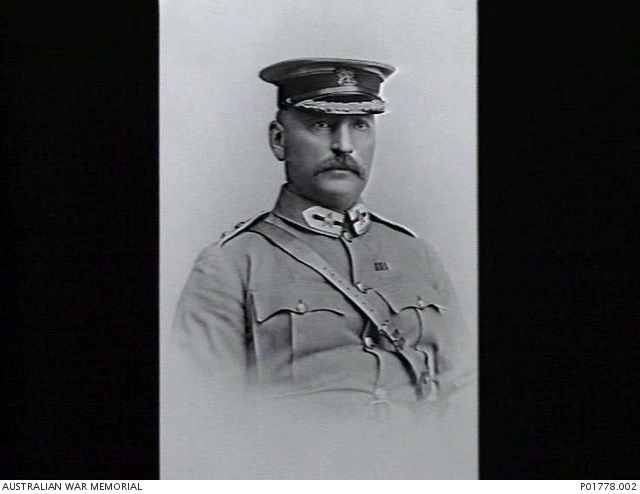 A First World War brigade commander, politician, and grazier, Granville Ryrie was born at Michelago, New South Wales, on 1 July 1865. He became a jackeroo and took easily to outback life, becoming a good horseman and an excellent shot. Ryrie managed a grazing property, married in 1896, and served in the Boer War with the 6th New South Wales Imperial Bushmen. He ended the war as an honorary major.

Ryrie returned home and continued to serve in mounted units while resuming his work as a grazier. In 1906 he was elected to the Legislative Assembly as member for Queanbeyan, resigning in 1910 in an unsuccessful effort to win a federal seat. The following year, however, he entered federal parliament as Member for North Sydney.

At the outbreak of war he took command of the 2nd Light Horse Brigade as brigadier general. He landed at Gallipoli on 19 May 1915, where his leadership, courage, and willingness to question orders earned him the respect of his men. He was wounded twice and returned to Egypt to lead his brigade under Chauvel. In London during the Romani battle, Ryrie was not involved in a major battle until Gaza in 1917. He was at Beersheba and led his men during the long northward march through Palestine, on one occasion allowing captured Turks, with whom his men bivouacked, to keep their weapons for defense against hostile Arabs.

Ryrie was not promoted during the war despite having led his men through a series of important victories the like of which were not possible on the Western Front. His success as a commander rested, as Charles Bean wrote, on his being "a hero to his men": he made no serious errors of command, led by example, and was careful with the lives of his soldiers.

He was made commander of the Australian Mounted Division in December 1918 and became commander of the AIF in Egypt in April 1919. A month previously he had ordered an Arab village burnt when its inhabitants refused to hand over two men that had murdered a Ghurka sentry under his command. He returned to Australia later that year.

Back home, Ryrie resumed his political career, serving as Honorary Assistant Minister of Defence in 1920-21, but did not retire from the Army until 1927. He held further political posts before becoming High Commissioner to London late in 1927. Ryrie's blunt style and forthright manner won him many admirers, not least among his fellow delegates to the League of Nations.

Ryrie returned to Australia in 1932 but failing health prevented resumption of his public career. He died in Sydney on 2 October 1937.