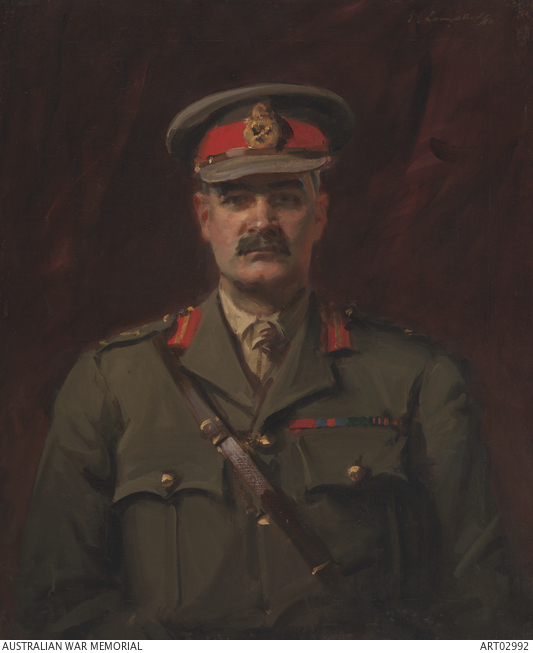 Harold William Grimwade was born at St Kilda, Melbourne, on 18 May 1869 to Frederick Sheppard and Jessie Taylor (nee Sprunt). He attended Melbourne Grammar School before moving on to the Queen Elizabeth School at Ipswich, Essex, England. Grimwade subsequently served an apprenticeship in London and returned to Melbourne as a qualified pharmacist. He joined the Victorian Field Artillery in 1891, and was promoted to the rank of lieutenant colonel on 16 May 1910.
In August 1914, Grimwade was appointed chief embarkation officer for the Australian Imperial Force (AIF) in Victoria. He embarked from Australia on board HMAT Wiltshire on the 18 November 1915, and arrived at the Suez Canal in Egypt on 15 December 1915, too late to join the Gallipoli campaign. He, along with his unit trained in Egypt until March 1916 when the unit moved to France. On 10 July 1916, he was promoted to colonel, appointed temporary brigadier general and was given command of the 3rd Australian Divisional Artillery.
During 1917 and 1918 Grimwade was highly decorated for ‘services rendered in connection with military operation in the field. This included a Special mention in Sir Douglas Haig’s Despatch in April and November of 1917, a Companion of the Order of St Michael and St George in June of 1917, and a Companion of the Order of the Bath in June of 1918.
In November of 1918, after the Armistice, Grimwade was made General Officer Commanding Royal Artillery, a position he relinquished at the end of January 1919. He returned to Australia in June 1919 via the United States, and his appointment with the AIF was terminated on 24 August 1919.
From 1926 to 1930 he was General Officer Commanding the 4th Division of the Australian Military Forces (AMF). After his AMF service he was a member of the Felton Bequest committee and a director of several companies including Australian Consolidated Industries Ltd and Felton Grimwade & Duerdins.
Harold William Grimwade died on the 2 January 1949 at his home Marathon in the Melbourne suburb of Frankston.