Frank Harold Crossley was born on 3 May 1874 at Kew, Victoria, to parents Henry Crossley and Elizabeth Jane Crossley (née Barnes). He was the youngest of four children, with two sisters and a brother. His enlistment records reveal his occupation as actor and author, and he was a cousin of the contralto, Madame Ada Crossley. Crossley married Lilian Kathleen Lloyd at Newcastle, New South Wales in 1899. Crossley’s wife was a gifted musician and actor who performed under the name Miss Iza Millet. The couple had two daughters, Iza born in 1899 and Moya born 1901. Iza also became an actor and was a member of The Famous Digger Pierrots troupe from about 1922. Crossley trained in the George Rignold School of Acting.

Crossley was an established actor and singer well before the war and had appeared in the productions of The Belle of New York, where he was referred to as the polite lunatic, Fun on the Bristol (along with J. C. Williamson) in 1902, Sinbad the Sailor at the Melbourne Royal in 1904 and Our Boys of the Dardanelles at the Adelphi Theatre, Sydney in September 1915 and at the Princess Theatre, Melbourne, in October 1915.

Crossley enlisted in the Australian Imperial Force in Melbourne on 3 July 1916 at the age of 42. He joined as a private (later promoted to lance corporal) and was attached to the 18th Reinforcements of the 23rd Battalion. He embarked from Australia in November 1916 on the troopship Hororata and arrived in Plymouth, England, during January 1917, and then to France in July 1917. Service records reveal that he was detached from the 23rd Battalion to the Australian Corps Headquarters in July 1918 and assigned to Australian Corps Headquarters (ACH) (“corps concert party”). This was a common reference in the service records for members of the Anzac Coves concert party. He was still attached to ACH in January 1919.

The service record date of July 1918 appears to be much later than when Crossley is identified as being a member of the Anzac Coves. He wrote and acted in the Coves’ famous pantomime Dick Whittington and his Cat during Christmas 1917 and was a member in their performance at Buckingham Palace in February 1918. He was also involved in performances at Jubilee Hall, Weymouth, England, during February 1918. Crossley was often referred to in the programs as Comedian and Raconteur.
He returned to Australia aboard the troopship Main in July 1919. He arrived in Australia during October, and was discharged in November 1919.

After the First World War, Crossley continued in theatrical roles, the first since his discharge being in The Squatter’s Daughter at the Princess Theatre, Melbourne in October 1919. Other performances included the play When London Sleeps at the National Theatre, Tasmania, in 1920; regional concerts in Victoria between 1921 and 1924’ and The Woman with Four Faces at the Paramount Theatre in Melbourne in March 1924. In December 1927, Crossley produced and appeared in the Theatre Association Production A Full House in Melbourne in 1927 and staged the comedy production The Family Upstairs for the Theatre Association of Victoria in April 1927. Crossley’s wife was associated with him in a number of theatrical productions until her death in May 1933.

From 1927 through to 1932, Crossley appeared in numerous radio broadcasts; in 1932 he ceased performing and was engaged in business interests. 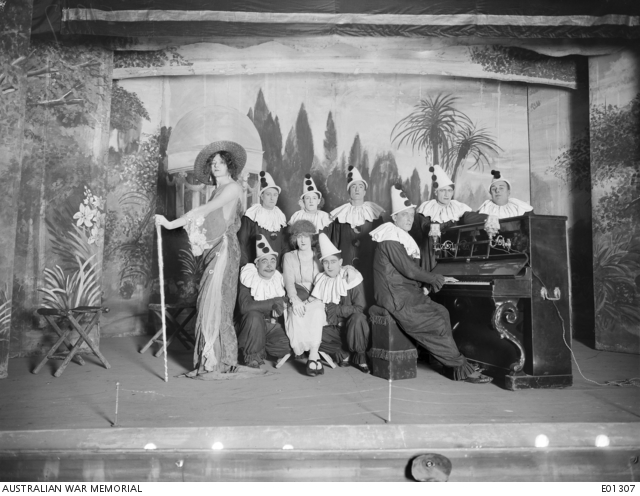 The “Anzac Coves” Concert Party in a theatre erected in a French village. Identified from left to ... 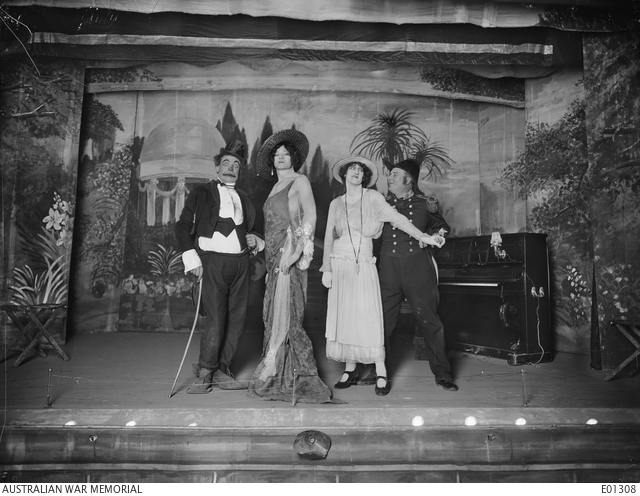 Group portrait of the “Anzac Coves”Quartet. Identified from left to right: 1992 Lance Corporal ...