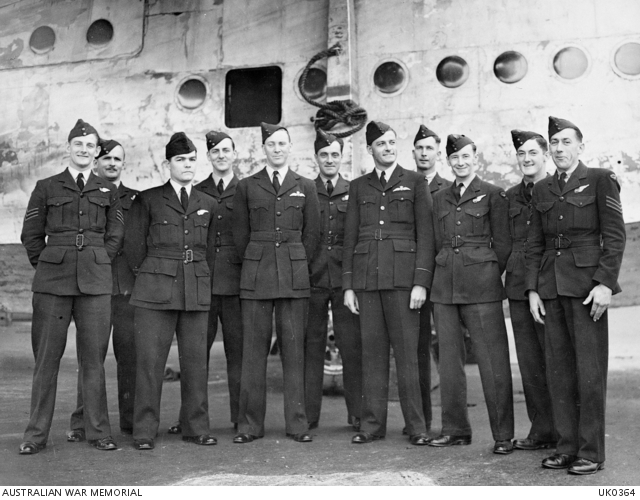 Colin Stewart Cameron was born at Wingham on the mid-north coast of New South Wales on 28 October 1923 to parents Alexander and Susanna (née Allan). He grew up on the family farm at nearby Marlee, attending Millingarie Public School before moving on to Taree High School. After graduating in September 1940 he continued his education in Sydney, undertaking a Diploma in Draughtsmanship at Kingsford Smith College while also working as a machinist at the Crown Crystal Glass Works in Bourke Street.

In early September 1941, Colin applied to join the Royal Australian Air Force (RAAF) Training Corps, but was judged to be too old. He applied to join the RAAF several weeks later and was accepted on his 18th birthday, earning him the distinction of being among the youngest recruits to be accepted by the RAAF. He officially enrolled with the RAAF Reserves on 3 January 1942, and was placed in charge of the senior officers’ bar at Eastern Command Headquarters.

After receiving his Reservist Badge, Colin enlisted with the Permanent Forces on 22 May 1942 with ambitions of becoming a fighter pilot. He entered training camp with the rank of aircraftsman and was posted to stations across several states in the course of training with air crews. He was promoted to the rank of leading aircraftsman on 22 July 1942, and earned his Air Gunner Badge and promotion to temporary sergeant on 4 February 1943. During this period he also appeared in a recruiting film for the RAAF.

Colin embarked from Melbourne on 6 March 1943 and was sent to Canada as part of the British Commonwealth Air Training Plan, commonly known as Empire Air Training Scheme in Australia. He was posted to the No. 31 Royal Air Force Personnel Depot at Moncton in New Brunswick and tasked with instructing trainee gunners. During this eight-week posting, Colin befriended several local farming families resulting in his engagement to Blanche Kyle, the daughter of a local farmer.

Colin arrived in England on 4 June 1943 and soon after was posted to the Royal Air Force station and flying boat base at Mount Batten for duties with No. 10 Squadron RAAF. This squadron was primarily tasked with locating and destroying German submarines, although it also assisted in air-sea rescues and transport missions. Colin joined the crew of “K” Katie, and after a short period of further training, commenced flying missions during the most intensive period of operations for the squadron throughout the war.