George Washington Lambert was born in St Petersburg, Russia, and arrived in Australia with his mother in 1887. Lambert studied with Julian Ashton at Academie Julian in Sydney from 1896-1900 and was the first recipient of the NSW Travelling Scholarship. Moving to Paris, he studied at Académie Colarossi's and Atelier Delecluse from 1900-01. A year later, Lambert moved to London where he exhibited at the Royal Academy from 1904 until 1911, with considerable success. However, it was as a portrait painter that he gained his greatest reputation.

In 1917, he was approached by both the Canadian and Australian governments to work as an official war artist. The Canadian war art scheme sought him to work on a large battle painting, while the Australian High Commission in London wanted him to go to Palestine. After some deliberation, he decided to accept the Australian offer and was officially appointed in late 1917. Attached as an honorary lieutenant to the Australian Imperial Force (AIF), who were then fighting the Turks, he left London on 25 December for the Middle East. During the train crossing through France and Italy, Lambert made sketches of the passing landscape through the window. These were the first of seventy-six drawings produced during 1918. Many are portraits of the officers and men who were based in Egypt and Palestine.

Lambert was reappointed in 1919, now as honorary captain, and travelled to Gallipoli and the Middle East to record the battlefields, as well as make preparatory drawings for the planned large commissioned paintings. One of the commissioned works, ANZAC, the landing 1915, is the largest and one of the most important paintings in the Memorial's art collection. Often reproduced, it has been continuously on display since the Memorial first opened in the Exhibition Building in Melbourne in 1922. Other battle paintings he produced include The charge of the 3rd Light Horse Brigade at the Nek, 7 August 1915 and The charge of the Australian Light Horse at Beersheba, 1917.

In marked contrast to the large-scale, carefully composed and detailed battle paintings that took at least two years to complete, Lambert produced an impressive group of small gem-like oil sketches on wood panels. These exquisite little works, rapidly executed on the spot, some painted on cigar box lids, are the antithesis of his battle paintings. They are spontaneous, intimate oil studies. Most were painted in the Middle East and a few were made at Gallipoli in 1919. Together with the battle paintings and the large holdings of drawings in the collection, Lambert's small oil sketches comprise a memorable visual interpretation of places and events experienced by Australians at war. 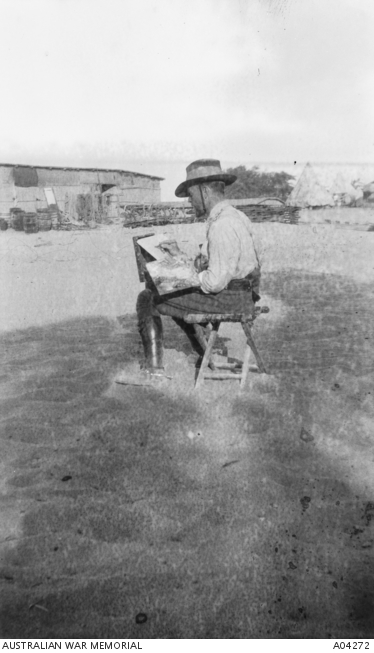