William Darwin was born on 21 August 1892 to parents James Darwin and Lucy Agnes Downes at White Hill, Victoria. His father later married Harriet Emily Langdon in 1897 and it was her name recorded as his mother on his death record. Harriet died on 13 March 1910 and his father, James, died on 28 March 1911, when he was 19 years old. Census records show that in 1914, he was living at Sandhurst East, Bendigo.

Before enlisting in the Australian Imperial Force during the First World War, William Darwin was a member of the Bendigo Highland Pipe Band and the Kangaroo Flat Fire Brigade. He was working as a warder at Bendigo Hospital when he enlisted on 18 August 1914. It is noted that he recorded his occupation on his enlistment forms as fire fighter.

Before he embarked from Australia, Darwin was staying with J J Montgomery of Lilac Street, Bendigo. On his enlistment papers, he gave his address as Bendigo Caledonian Society and his next of kin as Mrs Murray of Short Street, Bendigo. Darwin embarked from Melbourne aboard HMAT Hororata with the 7th Battalion on 19 October 1914.
Darwin participated in the landing on Gallipoli on 25 April 1915 and was appointed Acting Sergeant on 28 August 1915. He was also a member of the 7th Battalion Band. Darwin served at Gallipoli until 18 September 1915, when he was admitted to hospital. Darwin returned to England in October 1915. On 30 November 1915, it was reported that he had been admitted to hospital in Edinburgh, Scotland, suffering from typhoid and a wound in the left leg. A medical report dated 28 September 1916 stated he was suffering from shell shock and had been buried by a shell explosion at Gallipoli. He was was dug out, unconscious, after 3 ½ hours. He was declared permanently medically unfit for service on 29 September 1916.

While in Scotland, Darwin wrote a poem that would become part of the song 'Anzacs, Well Done!' on 24 June 1916. The poem was subsequently published in The Bendigo Independent on 11 September 1916. The poem was read by a fellow battalion member who then wrote to the newspaper. This letter was published on 2 October 1916 and recounted the story of how the writer had witnessed Darwin 'jump over the parapet and risk his life to save a wounded Turk, who was lying in the danger zone, under heavy fire.' The writer subsequently spoke to Darwin about this incident, who reportedly said 'I have no mother or father nor anyone who would miss me if I were knocked out, but that old Turk may have a wife and a lot of little children to care for him, also a poor old mother and father waiting for him to return. Just because he is one of the enemy we must not treat him as dirt, for he is a man the same as I am.'

Darwin returned to Australia on 17 October 1916, still suffering from shell shock. He arrived back in Bendigo on the afternoon train on 11 December 1916. After the war, he started writing songs, and travelled to England in 1920 via New Zealand, Hawaii, San Francisco and Vancouver. Once in the UK, he immediately went to Scotland and returned to song writing.

Darwin returned to Australia by February 1924, and realised that women's pipe bands were unable to compete in band competitions in Australia, so commenced fundraising to allow them to travel internationally. A letter that he wrote on 9 February 1924 requesting his war service medals, was written on stationery with a header ‘Australian Scottish Ladies’ World Tour Pipe Band’ with a banner across the top with the request ‘Support Lady Pipers World Tour Appeal’.
Darwin married Dorothy May McPherson at Bendigo on 5 August 1933 and the couple had two children.

Darwin enlisted in the Australian Army during the Second World War where he gave his date of birth as 21 August 1894 and place of birth as Ascot Vale. He enlisted at Moonee Ponds, Melbourne on 17 May 1942 and served with 18 Battalion, Volunteer Service Corps. He was discharged on 3 October 1945.

Other stories that have emerged about Darwin include an incident where he rescued people from a burning building in Vancouver in 1920, another where he saved two sisters from drowning in New Zealand despite not being able to swim himself, and accepting a challenge to wheel a fellow bandsman in a wheelbarrow from Melbourne to Sydney along the Hume Highway in 1935.

In 1972, Darwin joined the Footscray Yarraville City Band and encouraged the band to enter the Toronto International Band Championships in 1975, where they won all three competitions they entered. 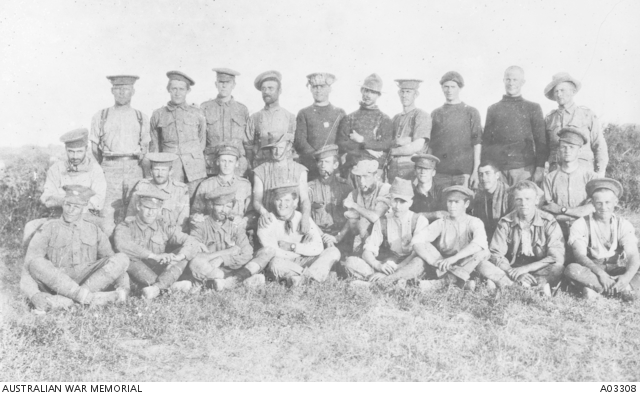 Group portrait of the surviving members of D Company, 7th Battalion after the Battle of Krithia. ... 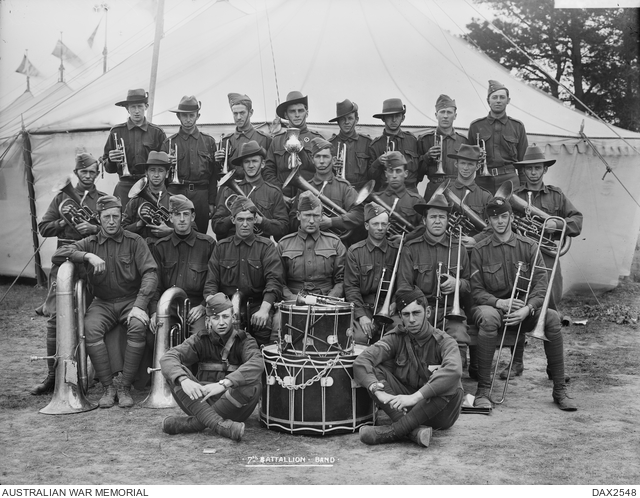