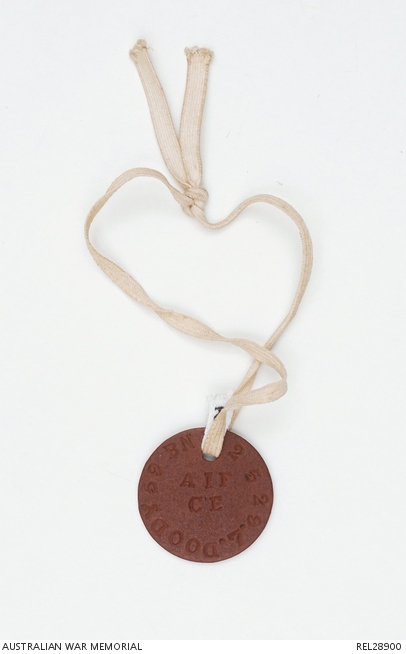 Associated with 2529 Private Leonard Doody, DCM, 59 Battalion AIF. He lived in Kerang, Victoria and worked as a horse breaker and clipper until his enlistment from Bendigo on 5 July 1916. He embarked for England on the transport ship HMAT Shropshire from Melbourne on 25 September 1916. He joined 59 Battalion in France on 6 February 1917 and was temporarily detached to 5 Division Canteen on 9 May. Rejoining 59 Battalion on 20 August he was wounded during a gas attack on 26 September. He rejoined his unit on 24 March 1918 after time in hospital and with 184 Imperial Tunneling Company. He continued to serve with the 59 Battalion until he was wounded by an exploding gas shell on 10 May 1918 and classified as a 'mental case'. He was sent to hospital in England and returned to Australia for discharge on grounds of organic dementia on 21 July 1918. He was awarded the Distinguished Conduct Medal for his conduct during the action in which he was wounded. The rommendation for award of the Distinguished Conduct Medal reads, 'For conspicuous gallantry and devotion to duty at VILLERS-BRETONNEUX. During the attack on VILLERS-BRETONNEUX on the night of 24/25th April 1918 this man attacked an enemy machine gun position single handed, bayoneted three of the enemy gunners, and captured the machine gun. Later he was a member of a bombing party which cleared several enemy positions. He continued to do excellent work until he was wounded. By his courage and determination he set a fine example to his comrades.'