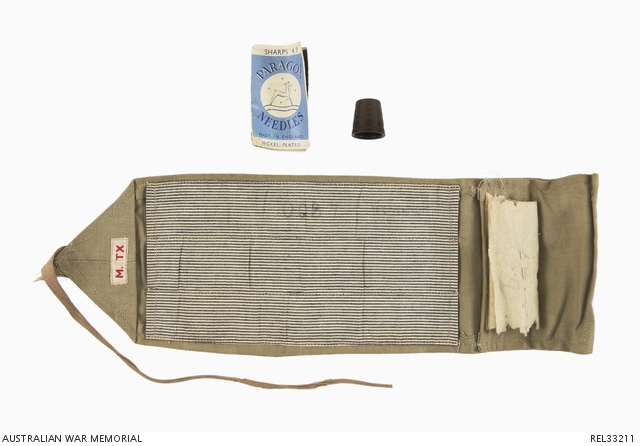 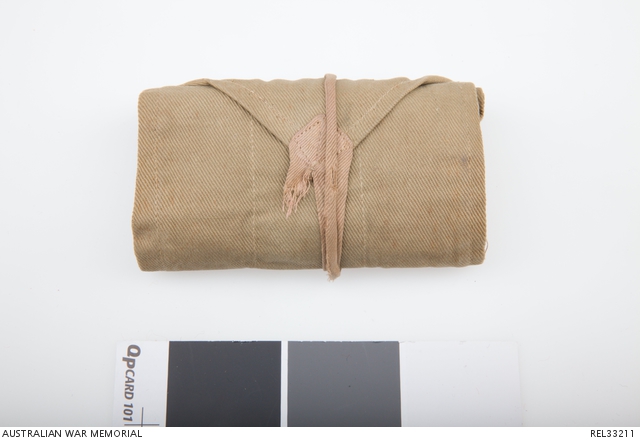 Australian Army sewing kit made from khaki cotton. Most of the inside of the sewing kit is lined with cotton with thin blue and white stripes. '4800' is written near one edge in black ink. The kit is missing the wool and cotton carried inside but holds three needles and a tack as well as a bakelite thimble, a small white button and a needle packet containing two needles and a needle threader. These items are held in a small three sided pocket at the end of the sewing kit. Sewn to the top of this pocket is a square piece of white wool in which the needles are kept. The sewing kit is rectangular when spread out, although one of the shorter ends comes to a triangular point. A maker's label which reads 'M. TX' , in red cotton on a white background is sewn onto the cotton at this end. The triangular point at the end has a small opening under the maker's label, as a result of the end being folded over and sewn in place. At the point there is a thin piece of khaki cotton which serves to secure the kit when it is rolled closed. Originally there were two ties but one has been lost.

This sewing kit, also known as a 'housewife', is an example of those made in the factory of H.E.Barry and Son in Brunswick, Melbourne. This factory, run by Mr Harold Barry, was contracted by the Australian Army during the Second World War to make these kits as well as shorts, shirts and trousers. They also made overalls used by all three services. Initially located in Balmoral Avenue in Brunswick the factory moved to larger premises at Lygon Street, Brunswick in 1941 and employed approximately 15 women during the war.
The contract to make the housewives lasted until 1942 and during this time needles were so scarce in Australia that Barry imported them from New Zealand after exhausting supplies in Sydney and Brisbane. The thimbles in the kits were manufactured by a small Melbourne engineering firm. Barry owned a three wheeled electric van during the war which he used for pick ups and delivery. He continued to run the van in the post war period. During the war Barry's son Jack and his three daughters, Olive, Jean and Joyce, all worked in the family business. Jack was a cutter, Jean worked in the office and also did some button hole work, Olive was a two needle machinist and Joyce worked a single needle machine. When the war ended and the army contract finished Barry returned the factory to manufacturing shirts and pyjamas until he retired. He died in 1955, aged 68.
This housewife was returned to the Barry family by a solider after the war. Family recollection indicates that he may have been Ernest Alfred Clarke who served as a gunner with 2/6 Field Regiment. Before enlisting he had been employed at the factory as a cutter.