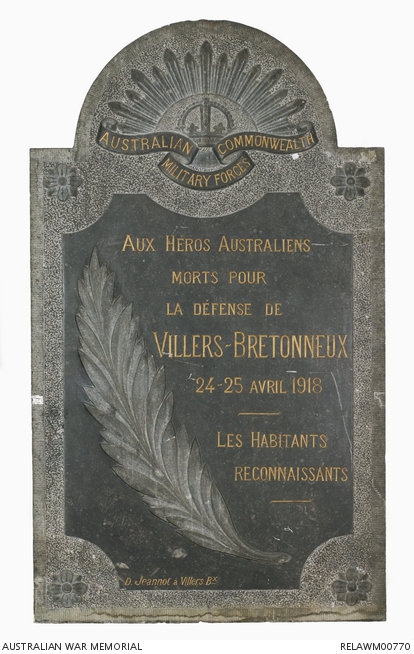 Granite memorial tablet in the form of a rectangle with a semi-circular top bearing an Australian 'Rising Sun' badge in raised relief. The scroll beneath the badge is of polished granite and bears incised lettering 'AUSTRALIAN COMMONWEALTH MILITARY FORCES'. There is a carved flower at each corner of the rectangle. The central panel of the tablet is also of polished granite and has incised lettering, 'AUX HEROS AUSTRALIENS MORTS POUR LA DEFENCE DE VILLER-BRETONNEUX 24-25 AVRIL 1918 LES HABITANTS RECONNAISANTS', and 'D. JEANNOT A VILLERS BX'. All lettering on the tablet has been gilded. The tablet also bears a palm leaf in low relief.

Presented by the Mayor of Villers-Bretonneux, on behalf of the town's inhabitants, to members of an AIF Graves detachment, representing the Australian people, on 14 July 1919. The mayor's presentation speech included the following, 'The first inhabitants of Villers-Bretonneux to re-establish themselves in the ruins of what was once a flourishing little town have, by means of donations, shown a desire to thank the valorous Australian Armies, who with the spontaneous enthusiasm and characterisitc dash of their race, in a few hours chased an enemy ten times their number...They offer a memorial tablet, a gift which is but the least expression of their gratitude, compared with the brilliant feat which was accomplished by the sons of Australia...Soldiers of Australia, whose brothers lie here in French soil, be assured that your memory will always be kept alive, and that the burial places of your dead will always be respected and cared for...'.