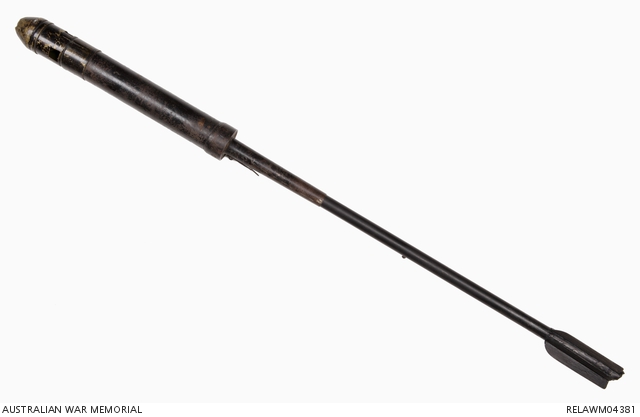 Message rocket consisting of two sections - the head of the rocket that contains the propellant and has a siren whistle at the tip, and the tail which is a thin two-piece tube which carries the smoke and flare composition and has a receptacle for carrying messages. There are three tail fins which have been welded onto the end of the tube. The message rocket could travel between 731 metres and 2 kilometres.

Message rocket associated with the service of Lieutenant William Henry Gregory Geake who is credited with its invention. Geake was born in Berkshire England on 23 February 1880 to John Venning Sandercock and Sarah Ann (nee Gregory) Geake.

He was educated at All Souls College at Reading before migrating to Australia as a young man. A keen interest in inventing was soon apparent and he applied for his first patent in 1906. On 18 March 1909 he married Sybilla Isabella Charlotte Marsh at Christ Church in Springwood.

Prior to the outbreak of the First World War, Geake worked as an agent for a Sydney wholesaler, opened his own importing business in Pitt Street, and acted as a consulting engineer.

It was as a consulting engineer that he enlisted in the AIF at Kiama, NSW, on 18 January 1916, and was posted to 13 Battalion reinforcements. On 17 April he was promoted to acting sergeant.

While in training Geake developed, together with a civilian, Alfred Salenger, a bomb throwing device. The apparatus came to the attention of the Ministry for Munitions in London who invited Geake to accompany a model of the invention to England for appraisal. He embarked from Sydney in December, arriving in England on 1 February 1917. In March he was posted to the British Munitions Inventions Department (MID) of the Ministry for Munitions.

In early 1917 Geake was given command of the recently created AIF Research Section's experimental grounds in Esher, Surrey. On the evening of 26 September, he was at the grounds when a blast occurred in a pressing shed where explosives were being compressed into rocket heads. At great risk, he immediately entered the building and helped out an injured man. Without pausing he re-entered the building and rescued a mortally wounded fitter, Henry Bernard Timmins. In the belief that there was another man inside he re-entered the building but was beaten back by the flames. The following day, although suffering burns, Geake attended a demonstration where a premature explosion blew off three of his fingers and severely injured his leg. For his actions in rescuing the injured men from the building Geake was awarded the Albert Medal, one of only three awarded to members of the AIF.

Geake was appointed a MBE (Military) in the 1918 New Year's Honours list, for his contributions to the war effort. During the remainder of the year he travelled between Britain and France on numerous occasions to assess the invention made by members of his section. Work at the experimental station was hazardous and few who worked there escaped unscathed. Geake was wounded on three occasions during his tenure.

Ironically, following the cessation of hostilities, the section diverted its energies to 'the designing of artificial limbs and apparatus for the care of wounded.' On 1 January 1919 Geake was promoted to captain and in late May returned to Australia via America at his own expense, arriving in Sydney in August. His appointment with the AIF was terminated on 5 December.

Following the outbreak of the Second World War, Geake enlisted in RAAF in 1940. To enable him to enlist, he concealed his true age by noting his year of birth as 1891. He gained his flying officer's commission in July 1940, rising to squadron leader in 1942. Stationed at RAAF Headquarters in Melbourne, Geake was again involved in evaluating inventions.

Geake died of complications following cancer surgery on 14 March 1944 and was buried at Rookwood Cemetery. He was survived by his wife and three children. His son, Gregory, also served in the Second World War.