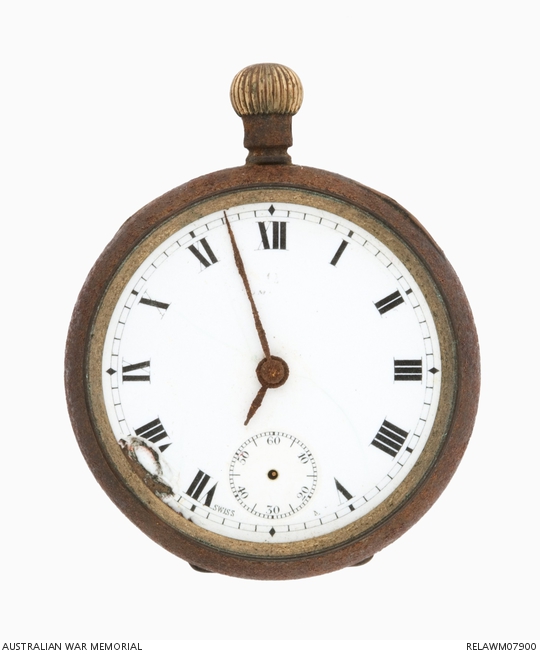 Small circular steel fob watch with white enamelled face and brass winding/adjustment crown. The face is printed with black roman numerals and minute graduations, and includes (where the numeral VI would be located) an inset sweep dial for seconds, graduated 10 to 60. The hand for this inset dial is missing. Both hour and minute hands are heavily corroded and the clear glass face cover is missing. The edge of the enamel face between the numerals VII and VIII has been chipped and broken away, and the hands have stopped just after 6.57. The steel casing is corroded and the hinged rear casing cover is rusted shut.

This watch was carried by Corporal G J 'Snowy' Howell of 1 Battalion, AIF, during the action at Bullecourt on 6 May 1917 for which he was awarded the Victoria Cross. Shrapnel struck the watch, stopping it at the time it was hit, (about 6.57 am) and severely wounding Howell in the right hand. George Julian Howell was born in Enfield, Sydney, in November 1893, and was working as a bricklayer before he enlisted in the AIF in June 1915. With the service number 2445, he sailed as part of the 7th Reinforcements to 1 Battalion, joining the unit at Gallipoli in November. After moving to the Western Front, Howell was wounded in the fighting at Pozières in July 1916, but rejoined the battalion later in the year. Promoted to corporal, he was awarded the Military Medal for leadership of a section in the attack on Demicourt, a fortified village in the Hindenburg Line, on 9 April 1917. This award was not announced, however, until after the action at Bullecourt a month later, in which Howell distinguished himself by running along the exposed parapet of a German trench under heavy fire, throwing bombs and bayoneting the enemy. His actions were instrumental in repulsing a strong German attack which had threatened the Australian positions in the area. The serious nature of his hand injury prevented Howell from serving again during the war, and he returned to Sydney in October 1917, eventually being discharged in 1918. Between the wars he was employed on the advertising staff of a number of newspapers and magazines. He enlisted again in the Second World War, and initially served in Australia as a sergeant with Eastern Command. Seeking a more active role, however, he joined the US Sea Transport Service in 1944, and was present at the American landings at Leyte in October of that year. After the war, Snowy Howell settled in Perth, WA, where he died in December 1964.