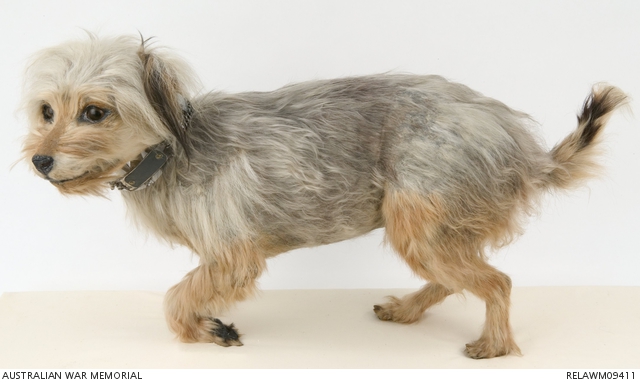 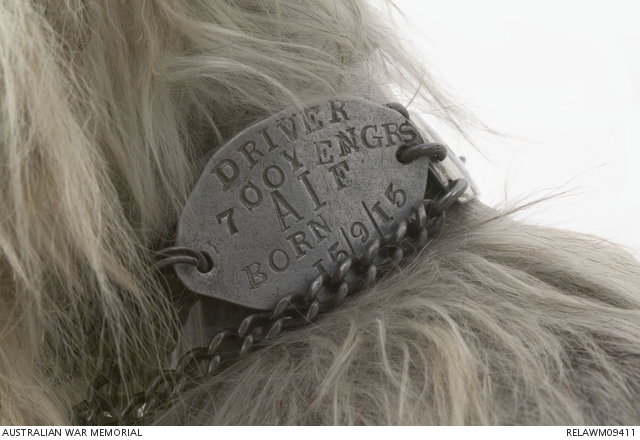 Mounted hide of 'Driver' a cream, blue, black and tan terrier cross. The dog has a medium length coat and lightly feathered ears, legs and tail. Although its tail is quite short it has not been docked. The short ears fold down. Driver wears a nickel plated collar with two solid metal bands linked by double rows of chain link. The longer of the bands fastens with a metal peg. The shorter band bears a plate which can be engraved with the animal's name. Attached to the chain is an oval aluminium identity tag which is impressed 'DRIVER 7 COY ENGRS AIF BORN 15/9/15'.

Driver, a terrier puppy, born in Sydney on 15 September 1915, accompanied 4 Field Company Engineers as a mascot when they left Australia on the troopship,Suffolk, on 30 November 1915, carried aboard in the pocket of Driver (Dvr) Fred Roberts. The unit was reorganised in Egypt and became 7 Field Company Engineers, arriving in France on 19 March 1916. After Roberts left the unit in 1916 Dvr (later Sergeant) Leslie Ernest Ross took over ownership of dog. Driver was always attached to the transport section and lived in the horse lines. He liked to sit on his owner's feet, ate anything offered and was great friends with the cook. Whenever the unit moved Driver travelled in the officers' mess cart. Driver was an expert ratter and in 1917, on the Somme, members of the unit took him on ratting expeditions in the old trenches at Bazentin and Longueville. At the time of the German withdrawal to the Hindenburg Line in 1917 Driver went missing from the unit as it moved through Bapaume, only rejoining it, footsore and hungry, two days later at Favreuil. Ross claimed that Driver could tell the difference between the sounds made by German and Allied aircraft and would hide only when German aircraft passed over the unit. Towards the end of the war Driver's daughter, Minnie, accompanied the unit as well but she stayed in France at the end of the war, while Driver was successfully smuggled back into England, against quarantine regulations. Ross again had no trouble smuggling the dog aboard the troopship 'Castalia' on the return trip to Australia, which left England on 13 April 1919 and arrived on 1 June. During the voyage, both the ship's captain and the officer commanding troops became aware of Driver's presence and demanded that he be put down before the ship arrived in Australia, the captain going so far as to say that the dog should be put in the ship's furnace. The troops threatened to kill anyone who killed Driver. He was hidden during inspections and members of the ship's crew were paid to hide him in their quarters. It was suspected that, as Ross would leave the ship at his home port of Sydney, customs officials would be waiting for him when the ship docked. A volunteer was found to smuggle the dog off the ship in Melbourne. A kit bag was cut up to make a pocket to fit inside a greatcoat and the soldier disembarked carrying the coat over his arm. He laid it on the pier for 20 minutes during a kit inspection but Driver did not move. Driver was then forwarded to Sydney by rail. He lived the rest of his life with Ross's father and died on 31 October 1926.