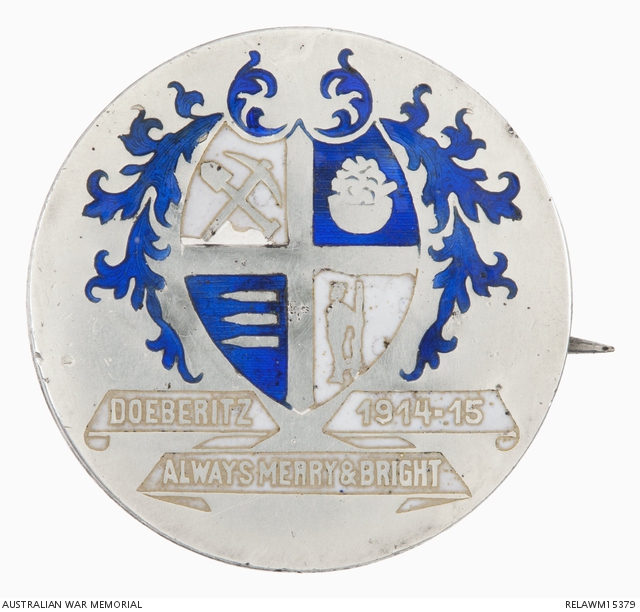 Round silver badge with an enamelled blue and white 'coat-of-arms' designed by British prisoner of war, Cecil A. Tooke, of the Royal Naval Division. The crossed pick and shovel means that the N.C.O.'s (non commissioned officers) were being made to work. The bowl with steam rising from it means that all the meals practically consisted of hot water. The three bullets represent 3 men who were shot inside the camp for trivial offences (one for trying to get a second issue of soup). The man tied to stake shows a favourite form of punishment by the Germans. Surrounding the coat-of-arms is blue mantling. Written below in a scroll is 'DOEBERITZ ALWAYS MERRY AND BRIGHT 1914-15.' The motto seemed to blind the Germans to the meaning behind the 'coat-of-arms'. The badge is attached to brown paper by a pin on the back. The badge has a card backing and is mounted in a copper coloured tin frame with a floral pattern.

Associated with the service of 5385 Second Corporal Arnold Blanston Mason, who was born in Taree, New South Wales on New Year's Day 1885. He was an engineer when he enlisted in the 7th Field Company Engineers on 29 October 1915. He embarked for Egypt aboard HMAT Berrima on 17 December as a member of the 2nd Reinforcements to the unit. Mason was taken on strength with the 14th Field Company Engineers at Tel-el-Kebir on 18 March 1916. He was promoted to Second Corporal (Lance Corporal) on the 3 April and embarked for the Western Front on 18 June.

On the night of 19 July Mason was ordered to advance with the 54th Battalion's third wave attack at Fromelles to attend to the blocking up of German communication trenches. However as soon as he reached the first line of trenches he sustained shrapnel wounds to his left cheek and between his eyes. After having a field dressing applied to his wounds he was unable to see and was put in a dugout with a number of other wounded men and told to remain there. At about 4am the next morning Mason and the other men were taken prisoner.

They were marched to Haubourdin where they spent the night and Mason's dressing was seen to. The next day the men travelled to Douai Hospital where Mason had a piece of shrapnel cut out of his top lip. He stayed there until 29 July when he was sent to Dulmen Prisoner of War Camp. There Mason's wound was dressed each day and he also had three small pieces of shrapnel taken out of his cheek. On 5 January 1917 he was sent to an exercise camp at Heesten Moor before being sent to Diepholz camp. On 12 November he was admitted to Soltau Hospital with neuralgia of the eyes. He stayed at the hospital until 5 January 1918 when he was moved back to Soltau camp to work in the camp's parcel office.

On 9 June Mason was transferred to Holland for exchange with German sick and wounded prisoners of war. He was repatriated to England and arrived in London on 20 November where he was granted one month's leave. He embarked for Australia aboard HMAT Ulysses on 18 January 1919 arriving in Melbourne on 4 March. Mason was discharged from the AIF in Sydney on 7 June medically unfit, his disability stated as a gunshot wound to the face.