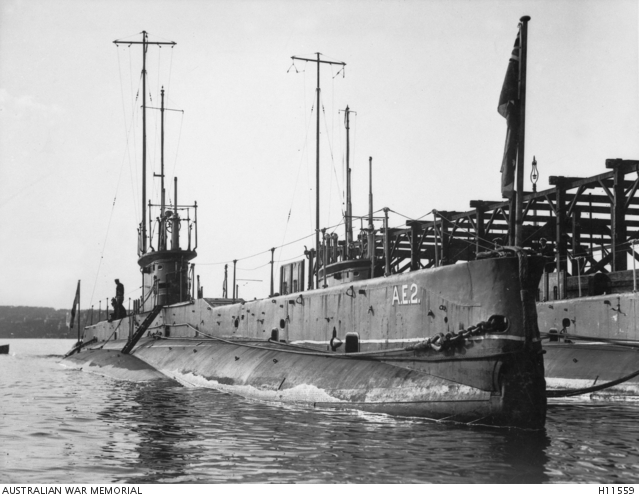 The AE2, the Royal Australian Navy's second submarine, was built in the United Kingdom and commissioned there on 28 February 1914 After commissioning, AE2 accompanied by AE1, sailed to Australia crewed jointly by British and Australian sailors, arriving at Sydney in May 1914.

Following the outbreak of war in August, both submarines proceeded to New Guinea for operations against the German colonies. AE2 was subsequently based in Suva, Fiji, and returned to Sydney in November 1914. In the following month she joined the second AIF convoy at Albany, Western Australia for passage to European waters and was towed across the Indian Ocean by the former auxiliary cruiser Berrima, now a transport.

Upon arrival in the Mediterranean, AE2 was assigned to operations off the Gallipoli Peninsula. She was ordered to penetrate the Dardanelles on 25 April 1915. AE2 entered the Dardanelles at 2.30 am. After torpedoing and damaging the Turkish gunboat Peykisevket she passed through the Narrows, pursued by surface vessels. She ran aground twice beneath the guns of the Turkish forts along the shore, but these guns could not be depressed low enough to fire on her.

Shaking off her pursuers, the submarine entered the Sea of Marmara on 26 April. For the next four days she attacked Turkish shipping with her torpedoes, but without success. Nevertheless, her presence was a nasty shock to the Turks. On 29 April AE2 met the British submarine E14 and the two vessels arranged to rendezvous the next day. E14 was the first of a number of submarines that were to follow AE2 into the Sea of Marmara and effectively close it to Turkish shipping bound for the battlefields of the Gallipoli Peninsula.

As AE2 surfaced at the rendezvous point on 30 April, the Turkish torpedo boat Sultan Hissar approached. AE2 immediately dived, but she lost trim and went out of control, broaching the surface twice. AE2 was hit in the engine room by Sultan Hissar's guns and the crew had no choice but to abandon ship. Although none of the submarine's complement were lost in the sinking, four were to die in captivity.

Some sources claim that AE2's signal announcing her penetration of the Dardanelles convinced the Commander in Chief not to order the re-embarkation of the troops that had gone ashore at Gallipoli on 25 April, but there is no real evidence to support this claim.