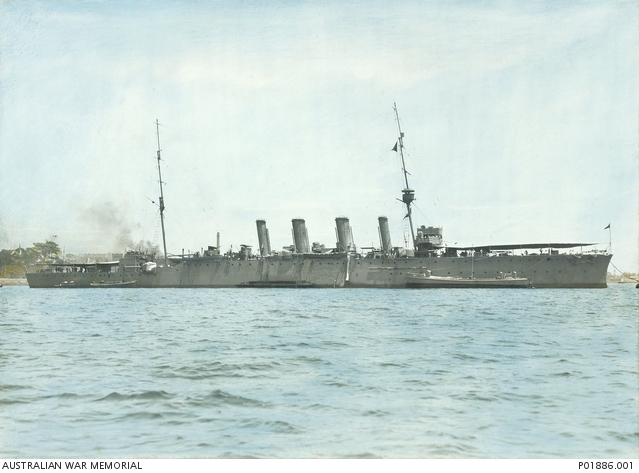 The proposal for an Australian Fleet Unit included the provision of light cruisers to support the battle-cruiser. Brisbane was the first built in Australia, with armament and machinery imported from the United Kingdom.

After commissioning in October 1916, Brisbane sailed for Malta where her equipment was updated. In early 1917 she deployed to the East Indies Station to conduct antiraider patrols, embarking a Sopwith Baby aircraft for reconnaissance.

In June 1917 Brisbane disembarked her aircraft and carried out patrol duties off the Western Australian coast before moving to the Pacific in September.

In 1918 she carried out patrols of the eastern Australian coast and in Torres Strait.

Brisbane was ordered to the Mediterranean in October 1918 and was en route when the war ended. After visiting Turkish waters she sailed for the United Kingdom where she was refitted. She returned to Australia in June 1919.

After the war, Brisbane carried out routine fleet duties. She served on exchange duties with the China Squadron of the Royal Navy in 1925. Placed in reserve between 1929 and 1935, Brisbane made her final voyage in the latter year, carrying the commissioning crew of HMAS Sydney [II] to the United Kingdom. She was scrapped there in 1936.