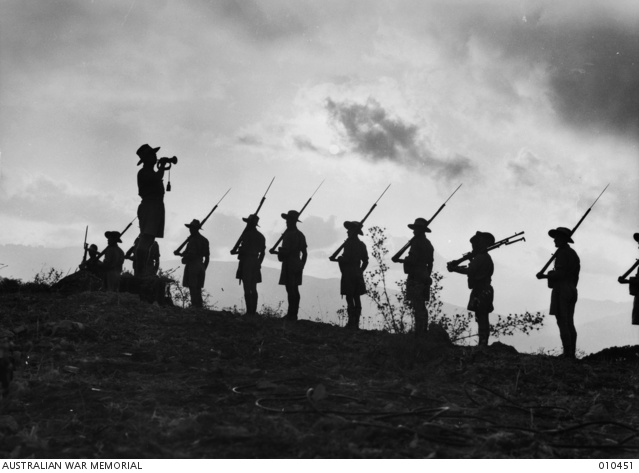 The battalion bugler of the 27th playing the Last Post at sun-down (Frank Hurley).  C30973

In military tradition, the Last Post is the bugle call that signifies the end of the day's activities. It is also sounded at military funerals to indicate that the soldier has gone to his final rest and at commemorative services such as Anzac Day and Remembrance Day.

The Last Post is one of a number of bugle calls in military tradition that mark the phases of the day. While Reveille signals the start of a soldier's day, the Last Post signals its end.

The call is believed to have originally been part of a more elaborate routine, known in the British Army as "tattoo", that began in the 17th century. In the evening, a duty officer had to do the rounds of his unit's position, checking that the sentry posts were manned and rounding up the off-duty soldiers and packing them off to their beds or billets. The officer would be accompanied by one or more musicians. The "first post" was sounded when he started his rounds and, as the party went from post to post, a drum was played. The drum beats told off-duty soldiers it was time to rest; if the soldiers were in a town, the beats told them it was time to leave the pubs. (The word "tattoo" comes from the Dutch for "turn off the taps" of beer kegs; Americans call this "taps" or "drum taps".) Another bugle call was sounded when the officer's party completed its rounds, reaching the "last post" – this signalled that the night sentries were alert at their posts and gave one last warning to the other soldiers.

The Last Post was eventually incorporated into funeral and memorial services as a final farewell, and symbolises the duty of the dead is over and they can rest in peace.