The recitation (including the Ode) 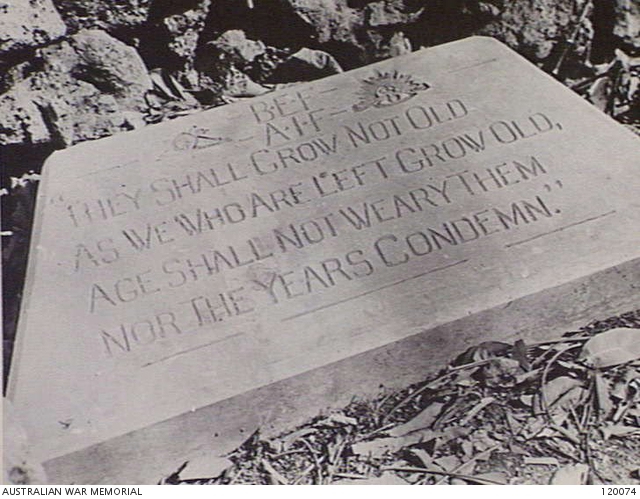 Memorial tablet in cemetery near Kupang, West Timor, where a number of Australian Second World War soldiers are buried.  C201676

In most ceremonies of remembrance there is a reading of an appropriate poem.

One traditional recitation on Anzac Day is the Ode, the fourth stanza of the poem For the fallen by Laurence Binyon (1869–1943). Binyon was the assistant keeper of prints and drawings at the British Museum, and the author of several volumes of verse. For the fallen was first published in the London Times in 1914 and later in many anthologies of war verse. It was selected in 1919 to accompany the unveiling of the London Cenotaph and, like so many memorial traditions, passed into common use across the Commonwealth. Its use on Anzac Day might have originated with the Queensland Anzac Day Commemoration Committee, which printed the poem on the cover of a collection of sermons and addresses for Anzac Day, published in 1921. Binyon’s poem was also read at the laying of the Inauguration Stone at the Memorial in 1929.

The most well-known lines are:

They shall grow not old, as we that are left grow old;
Age shall not weary them, nor the years condemn.
At the going down of the sun and in the morning
We will remember them.

In Flanders fields, by the Canadian officer Lieutenant Colonel J.M. McCrae (1872–1918), is another popular recitation. McCrae was a professor of medicine at McGill University before the war. A gunner in the Boer War, he served as medical officer with the first Canadian contingent in the First World War and wrote this poem at the second battle of Ypres in 1915. It was published anonymously in Punch.