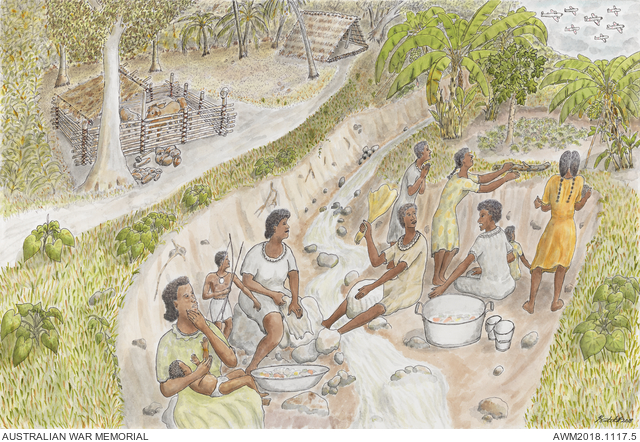 Kapua Gutchen Senior is a Miriam Mer man and Elder. He was born in 1957 on Waiben Island (also known as Thursday Island) and grew up on Erub Island (also known as Darney Island) in the Torres Strait, off the coast of north Queensland. He joined the Australian Army in 1987 and served with the 51st Battalion Far North Queensland Regiment. Kapua taught himself to draw. Sometimes he draws things from his imagination, but often he depicts campsites, boats, and buildings from his community.

Kapua made this drawing in 2018 using watercolour and pen on paper. The picture shows women on Erub Island during the Second World War. At that time, many men from Erub Island had gone to Thursday Island to serve in the Australian Army. It was very hard for families. Women had to take on both men and women’s tasks, including a dual parental/caring role looking after children and elderly people, and the repairing of fish traps and collecting of fish to feed the whole community. In this image, women are hiding in a creek bed washing clothes to avoid being seen by Japanese planes flying above a nearby island.

Kapua was born after the Second World War, but he learned about it through stories passed down from generation to generation in his community. The stories are told through speaking, singing and dancing and are very important to Torres Strait Islander peoples.

Today Kapua is a significant leader on Erub Island, teaching language, song and dance in his community. View more of his work here.

Back to story telling hub