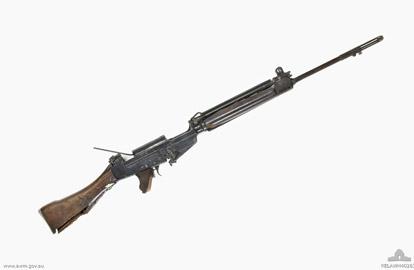 Australian forces took part in the Malayan Emergency from 1950 to 1960. Throughout this time units of the Royal Australian Air Force were involved in bombing operations against the Communist guerrillas, hidden deep in the Malayan jungle.

In 1964 Australian troops joined British and Malaysian security forces patrolling the borders against Indonesian raids. On 17 May 1965, 3 Platoon of A Company, 3RAR, set out from their base at Stass on a reconnaissance patrol through the jungle. As they approached a well-known border crossing used by Indonesian troops to infiltrate Malaysia, Private Larry Downes tripped an M2A3 anti-personnel mine. He was killed instantly by the explosion, along with Sergeant Vincent Vella, the acting platoon commander.

The L1A1 self-loading rifle that Downes was carrying when he was killed is one of the key objects in the new Indonesian Confrontation gallery. The impact of shrapnel from the mine can still be clearly seen on the damaged stock and pistol grip of the rifle.