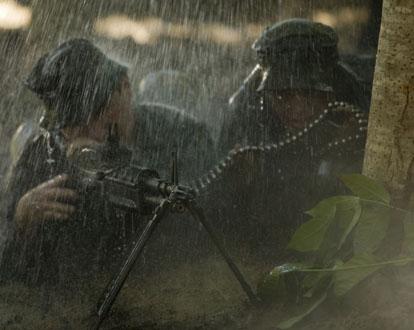 As part of the Vietnam experience you’ll get a fresh perspective on the historic Battle of Long Tan, with presentation of a new film shot specifically for the Memorial’s Conflicts 1945 to today galleries. The film will screen regularly in a theatrette in the Vietnam War gallery.

It’s the first time the Memorial has commissioned its own re-enactment production, adding to its already extensive range of popular and dramatic multimedia presentations. The film was shot on a plantation near Mackay in Queensland in July 2007, and is a historically accurate re-enactment of the battle rather than a dramatisation.

The filming involved an incredible level of detail, and the Australian Army provided significant assistance including soldiers as cast members, equipment and armoured personnel carriers.