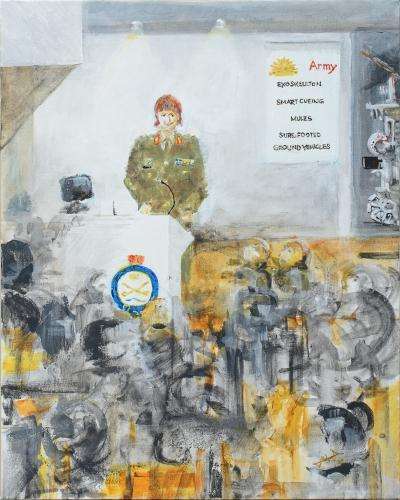 What a joy it is to know that Australia is now appointing senior officers who are selected for their brains, education, experience and resolve.

I attended the address given by Major General Kathryn Toohey, Head, Land Capability, Australian Army Headquarters when she spoke at the Royal United Service Institute (RUSI) of NSW in July 2018. I recorded the colourful occasion by making an ink sketch in the book that is with me everywhere. The General spoke about current army scientific and technological innovation and training, and described the benefits that have been developed. She also spoke about issues raised in deployments to operations in the field.

The RUSI is an independent, apolitical, educational association and library that has functioned since 1888.

This painting shows an auditorium with raised area and mic’d lectern for the speaker, with seating for the members and visitors. It illustrates an organisation giving professional insight and education. Its members are serving or retired army, navy or air force personnel with a commitment to staying abreast of current developments, as far as we can. The painting is an attempt to thank Major General Toohey for her work, and especially for her making time to attend and eloquently present information that might otherwise not have been made available.