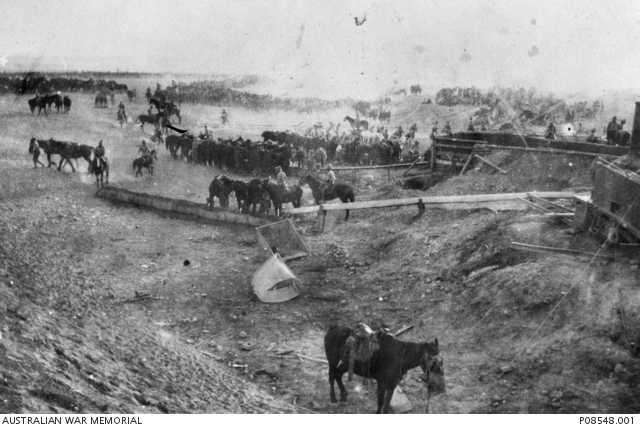 Beersheba was a heavily fortified town 43 kilometres from the Turkish bastion of Gaza. It anchored the right end of a defensive line that stretched from Gaza on the Mediterranean coast.

The first two frontal attacks on Gaza, in March and April 1917, failed. The British Army re-organised before trying again. The capture of Beersheba would break the Gaza—Beersheba line and enable the British, Australian and New Zealand forces to outflank Gaza.

The British 20 Corps launched an attack on Beersheba at dawn on 31 October 1917.

By late afternoon the corps had made little headway toward the town and its vital wells. Lieutenant General Sir Harry Chauvel, commanding the Desert Mounted Corps, ordered the 4th Light Horse Brigade forward to attempt to secure the position.

Brigadier General William Grant responded by ordering light horsemen of the 4th and 12th Regiments to charge at the unwired Turkish trenches. The light horsemen did not carry swords or lances, so they held their bayonets in their hands and used them as "swords".

The momentum of the surprise attack carried them through the Turkish defences.

The light horsemen took less than an hour to overrun the Turkish trenches and enter Beersheba.

Thirty-eight Turkish and German officers and about 700 other ranks were taken prisoner, and a supply of water was secured.

The fall of Beersheba opened the way to outflank the Gaza—Beersheba Line. On 6 November, after severe fighting, Turkish forces began to withdraw from Gaza further into Palestine.