Man in the mud diorama

A figure of an Australian soldier sitting in the mud with his head in his hands in the Western Front during the First World War. This life sized diorama was commissioned to highlight the harsh conditions the soldiers endured C251407

Sculptor Peter Corlett was commissioned in 1986 to create the Man in the mud diorama. He completed the work in Melbourne in 1989. It was then displayed in the First World War gallery of the Australian War Memorial until the gallery's closure in April 2013 for redevelopment.

The diorama illustrates the appalling conditions that were faced by those who served on the Western Front. It consists of a large background photo that shows abandoned guns and machinery, broken equipment and soldiers. The foreground of the work depicts a muddy landscape, a broken duckboard, and water. A soldier sits amid this scene of desolation, head in hands, a figure of complete despair.

The work was sculpted from a live model, but the artist also drew on images that he had seen throughout his life and also on some of the photographs in the Memorial's National Collection. The pose of the soldier was taken from the photograph C970558, which shows a group of soldiers gathered at a Regimental Aid Post in Picardie suffering from exposure to gas. One of the soldiers is sitting on the ground, elbows on knees and head in hands. 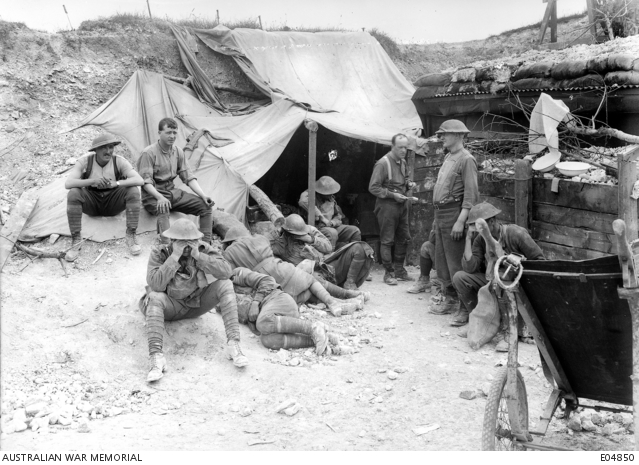 A group of unidentified Australian soldiers, suffering from the effects of gas, gathered at the Regimental Aid Post (RAP) of the 42nd Battalion awaiting medical attention. C970558