Victory in the Pacific (VP) Day 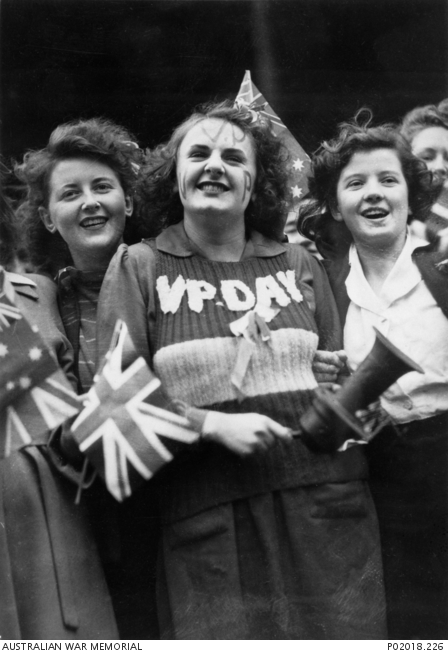 Photograph taken in Melbourne, Victoria, 15 August 1945.
Rejoicing broke out spontaneously when the surrender of Japan
was announced: the war was over. Lois Anne Martin knitted the
red, white and blue vest especially for VP Day and never wore it again.
The vest is on display in the Memorial's Second World War Gallery
P02018.226

VP (Victory in the Pacific) Day, also referred to as VJ (Victory over Japan) Day, is celebrated on 15 August. This date commemorates Japan’s acceptance of the Allied demand for unconditional surrender 14 August 1945. For Australians, it meant that the Second World War was finally over.

The following day, 15 August, is usually referred to as VP Day. In August 1945 Australian governments gazetted a public holiday as VP Day and most newspapers reported it as such. However, the governments of Britain, the United States and New Zealand preferred VJ Day. It is not true, as some have claimed, that the day was originally called VJ and that the name was surreptitiously changed later.