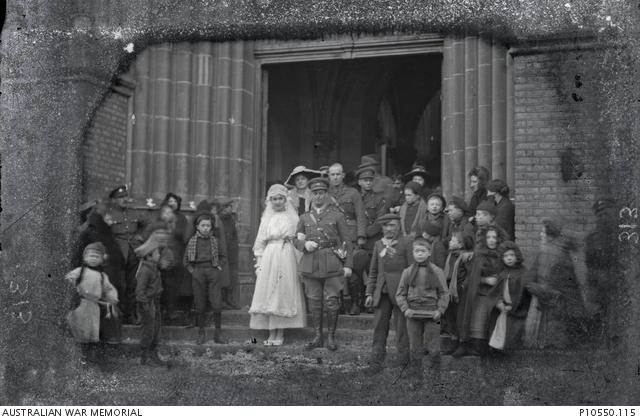 Vignacourt, France, January 1918. Temporary Captain Harry Hartley married Simone Marie Pecourt in the Church of Saint-Firmin, Vignacourt. A captain with the 2nd Australian Motor Transport Company, Hartley met Simone (a local Vignacourt woman) while he was stationed in the town. After the war they lived in Amiens, where they set up a tyre business. They had two children and stayed in Amiens until the German occupation of France in 1940. Hartley was killed during the evacuations. From the Thuillier collection of glass plate negatives. Taken by Louis and Antoinette Thuillier in Vignacourt, France during the period 1916 to 1918.
P10550.115

More than 13,000 Australian soldiers married while serving overseas during the First World War.

After the war, 5,626 members of the Australian Imperial Force returned to Australia with English brides. Many of these couples met while the soldiers were hospitalised in England.

Australians also had opportunities to meet British, French and Belgian girls in France while in billets or medical facilities, during leave, or even in the camps.

Australian soldiers were popular with British girls, although not everyone approved of liaisons. Reports of bigamy led to pressure for Australian Headquarters to provide potential marriage candidates with certificates stating that men were not already married.

Weddings usually had to be planned around leave and were often rushed and lacked the usual lengthy engagement.  This haste was compounded in 1919 when the Australian Government made an offer of free passage to wives of Australian soldiers whose marriages occurred before 1 September 1919.

Rationing of food, clothing and petrol in the United Kingdom were additional constraints. To achieve a traditional wedding required considerable resourcefulness.

During the early part of the war, a serviceman could only take his bride home to Australia if he paid for the journey. The large number of passengers resulting from the offer of free passage in 1919 caused enormous logistical problems and resulted in “Bride ships” sailing to Australia in 1919 and 1920. Soldiers usually accompanied their wives and children, although men and women were housed separately on the ships.

As there had been a dearth of marriageable men in Australia during the war years, overseas war brides were not always welcomed on arrival. On occasion, wives and children were not met and some abandoned brides would return home on the next ship.

Returned soldiers and their foreign-born wives and fiancées faced many challenges. In 1918 and 1919 Australia suffered from high unemployment rates, housing shortages, and an influenza epidemic which took many lives. Many Soldier Settlement properties failed due to unsuitability of the land and/or lack of expertise of the men who took up the scheme. 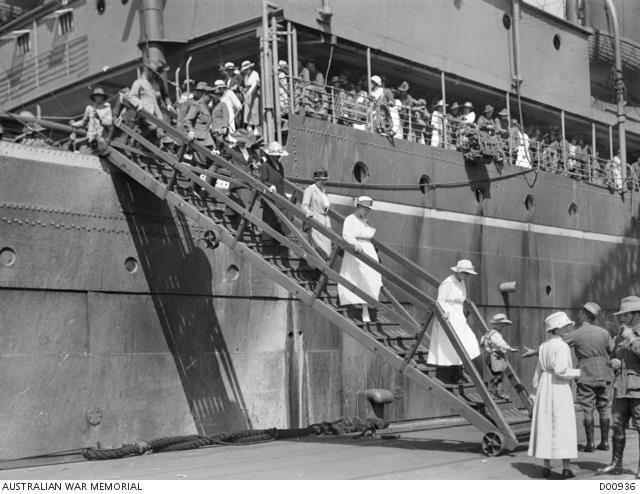 Cape Town, South Africa, December 1919. NCOs and wives going ashore on leave from the SS Borda. They had been delayed in Britain due to the limited supply of ships available for repatriation to Australia.
D00936 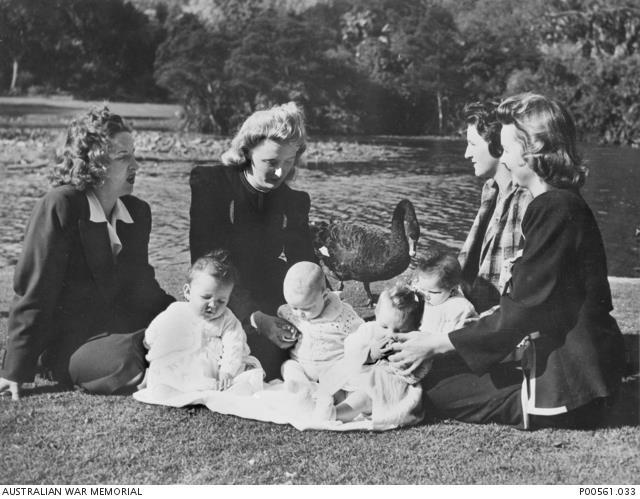 Melbourne, Victoria, c 1945. Four wives of American servicemen gather with their children in the Botanical Gardens during one of their frequent outdoor meetings. They are members of the US Servicemen's Wives and Fiancées Club which was made up of Australian war brides awaiting transport to America. The club had branches in all State capitals and its aim was to acquaint women with American customs, way of life, cooking methods etc. In a period of two and a half years more than 10,000 marriages and 2,000 engagements between Australian women and US servicemen occurred in Australia.
P00561.033

During the Second World War, around 15,000 women left Australia to live overseas, with more than two thirds moving to the United States of America.  After the Japanese bombed Pearl Harbour in December 1941, numerous American bases were established in Australia. American servicemen were seen as saving Australia from the Japanese, and Australian women were encouraged to join hospitality groups to ensure the Americans felt welcome. Dancing was a popular pastime and dance halls brought many couples together.

There were also increased opportunities for Australian men to meet potential brides overseas. In Britain, women had become an essential part of the auxiliary forces which brought more women in contact with servicemen. The Empire Air Training Scheme (EATS) took many Australian airmen to Canada, resulting in a significant number of Canadian war brides coming to live in Australia. In 1948, 4,027 wives, 878 fiancées, and 1,463 children travelled to Australia as a result of contact with servicemen in the EATS.

As in the First World War, leave restrictions and imminent departures overseas led to a sense of urgency in organising weddings, and rationing of food and clothing meant that they were often modest events. If a couple waited until reaching Australia, which had more lenient rationing regulations, there was a better chance of having a traditional white wedding.

In contrast with the First World War, overseas brides could come to Australia during the Second World War. In 1941, the Australian Government gave free passage to wives, widows and children of Australian servicemen. However the risks involved in travelling during the war meant most women waited until 1944 or later to leave their homeland.  Once again, the desire for passage to Australia at the end of the war resulted in logistical problems and it was sometimes years before a berth on a ship became available. Converted troopships, ordinary passenger ships, and even cargo ships were used to transport women and children to Australia. Fiancées were disadvantaged as priority for travel was given to married women.

Before 1946, transport via ship was not available from Western Australia to the eastern states for war brides. Mothers, babies and children had to travel via the train which crossed between Perth and Melbourne, earning the train the nickname “the Perth Perambulator”. Representatives of the Australian Red Cross travelled on the train to provide assistance to the mothers.  At various stops along the way, local residents provided mothers and babies with meals and refreshments, sometimes in their own homes. 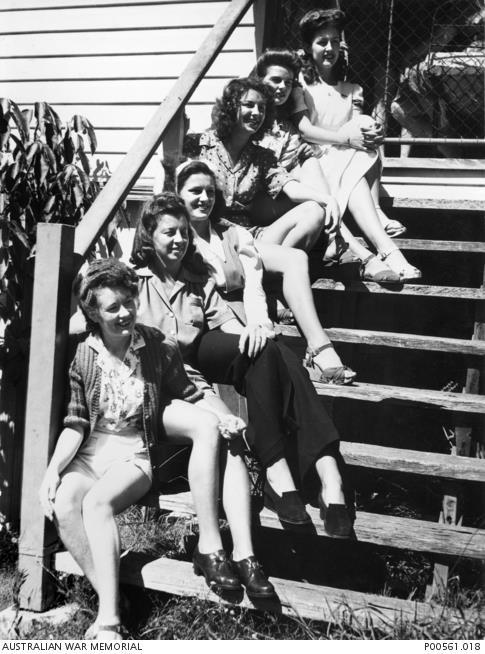 Sydney, New South Wales, c. 1943. Members of Sydney US Servicemen's Wives and Fiancées Association attended school to learn more about their own country in order to talk of Australia in American homes.
P00561.018

There was an Australian military presence in Japan from February 1946 to November 1956, initially as a part of the British Commonwealth Occupation Force (BCOF) and later during the Korean War. The official BCOF policy of anti-fraternisation prohibited service personnel from entering Japanese homes or taking part in family life. However, extensive contact occurred through employment, black marketeering, prostitution and social contact such as church attendance, entertainment and sight-seeing, all of which created opportunities for romantic attachment.

Permission from the Commander in Chief of BCOF was required for personnel to marry. However marriage to a Japanese person was specifically forbidden, hence the popularity of commitment ceremonies as an alternative or interim solution. 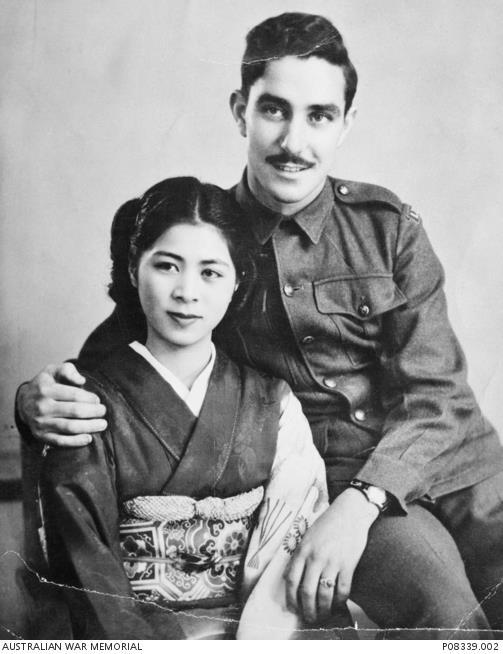 Hiro, Japan, 1950. Studio portrait of Fumika Itoh and her husband 22682 Private (Pte) John Kenneth Clifford, British Commonwealth Forces Korea (BCFK), taken to commemorate their commitment ceremony. Private Clifford had served in the Second World War (service number NX206168) prior to his posting to the British Commonwealth Occupation Force (BCOF) in Japan where he met Fumika in 1947. Fumika and their young daughter Mary sailed to Australia later in 1953 on the New Australia with other war brides and children. Despite their marriage, the Australian Government initially restricted the period of Fumika's residency to five years. A second daughter, Julia, was born in Australia.
P08339.002

Despite the romantic image of war brides, they faced many challenges. They were expected to move to their husbands’ home countries to live with them, so their first challenge was to obtain transport amidst the chaos of the postwar period.

War brides left family and friends to start a new life in an unknown culture, uncertain of the reception they would receive in their new home. Not all brides were welcomed by their new husband’s family, and some faced hostility from those who felt that local girls had been cheated of the chance to marry local men.