The Australian War Memorial operates the Official War Art Scheme, one of the longest running and largest commissioning programs of art in Australia. The Scheme makes a rich contribution to Australian art, while playing a significant role in Australia’s interpretation of its wartime history.

The term “official war artist” is used to describe artists who have been expressly employed by either the Australian War Memorial or the Army Military History Section (or its antecedents). The Memorial also commissions artists outside the Scheme to produce specific works of art.

The Official War Art Scheme was initiated during the First World War and was based on similar models in Britain and Canada. The Scheme was reactivated during the Second World War, and for the Korean and Vietnam wars. In 1999 the Scheme was renewed when artists were appointed to depict peacekeeping operations in East Timor (Timor-Leste). Commissions since then have seen artists deployed to Afghanistan and other regions in the Middle East, and to the Solomon Islands.

Typically, the Scheme has involved an artist being embedded with Australian military forces in conflicts or peacekeeping missions, for the purpose of creating a personal and informed representation of that conflict. From the outset, the Scheme has covered both the frantic and hellish experience of soldiers in battle as well as more routine subject matter, such as service people at rest or industry in wartime.

Official war artists have always balanced an objective intention with an exploration of a visual and sensory dimension of war that is often absent in written histories or other forms of reportage. The works produced by official war artists display a highly diverse range of imagery and perceptions of conflict, and more recently of peacekeeping. What has also contributed to the diversity of this imagery has been the selection of skilled and established career artists, who work with different media and have a variety of interests, styles, and approaches to art.

Today the Official War Art Scheme continues to play an important role in the Memorial’s activities, particularly as it records and commemorates Australia’s involvement in contemporary conflicts. 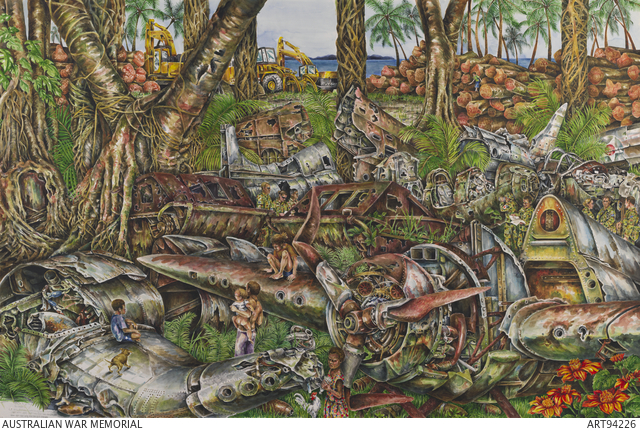