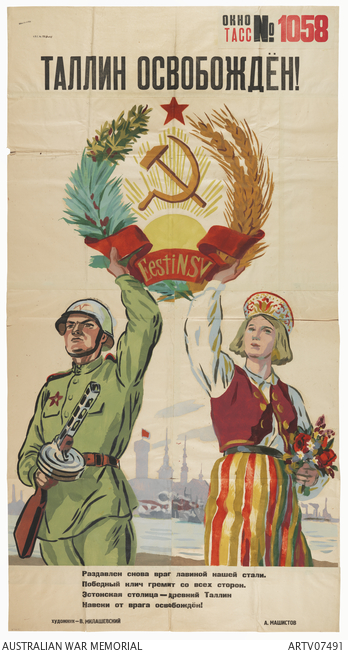 A Russian propaganda poster created under the TASS news agency in Moscow, that depctis a Russian soldier and a woman in Estonian national dress hold a wreath together above their heads, to celebrate the liberation Estonian capital of Tallinn from Nazi occupation. The text below the image was written by TASS poet Aleksandr Ivanovich Mashistov, and translates as 'The enemy is again crushed by the avalanche of our steel, / The victory cry resounds from all directions. / The Estonian capital, ancient Tallinn, / Is forever liberated from the enemy.'

The translation was provided by the Art Institute of Chicago, which held an exhibition of TASS posters from July 31 to October 23 2011. The exhibiton's catalogue, "Windows on the War" (edited by Peter Zork Zegers and Douglas Druik), includes a large amount of information about the TASS posters, the artists and writers as well as methods of printing and distributing.