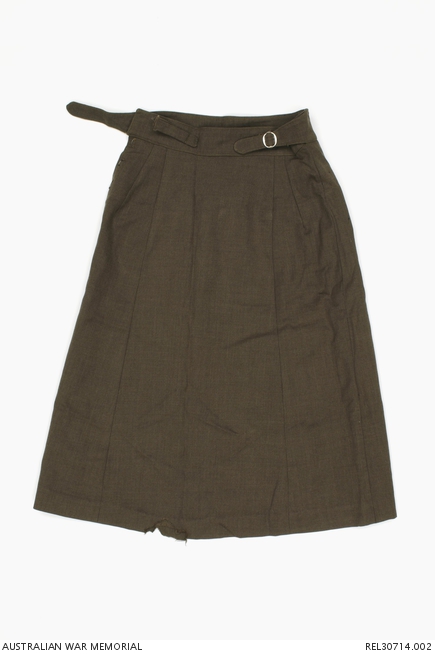 'A' line khaki wool skirt with six panels and front angled welt pockets. The skirt fastens on the left side by four hook and eyes with a buckle and fabric strap at the top. A matching buckle and strap is sewn onto the right side to adjust the fit. The back of the skirt has two darts below the waistband.A maker's label is sewn into the back of the waistband indicating the date made and the size '5'.

Worn by SFX15101 Private Nancy Stewart Eglinton. Eglinton was born in Adelaide, South Australia in January 1918 and enlisted in the Voluntary Aid Detachment on 10 November 1941. In 1942 Eglinton, with the majority of VADs, was transferred to the newly formed Australian Army Medical Women's Service. During the war she served in Northern Queensland, and possibly in New Guinea towards the end of the war. She served with 128 Australian General Hospital (AGH), 2/6 AGH and when discharged on 26 April 1946 she was serving with 101 AGH, based in Northfield, Adelaide. At the end of war she met and later married S3509 Colin Malcolm McEachern, a telegraphist from the Royal Australian Navy who served as a coast watcher during the war. He was awarded the Distinguished Service Medal during his service in HMAS Parkes.