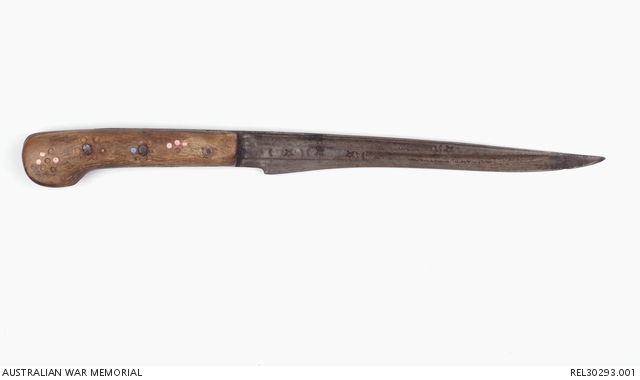 Turkish dagger with a slightly curved steel blade and a wooden handle. Both the blade and handle have decorative markings or cyphers.

This Turkish dagger was collected by 19138 Trooper Vincent Richard Geyle, 1 Light Horse Field Ambulance, AIF. Geyle, a Victorian, was born in 1895 and enlisted in the AIF in July 1917. Sailing from Sydney with Australian Army Medical Corps reinforcements aboard the 'Wiltshire' in February 1918, he spent a lengthy period at Ismailia in Egypt, before transferring to 1 Light Horse Field Ambulance in June.

Geyle's diary for 14 October 1918 records: 'Splendid work by 'C' Company today and 10,000 prisoners brought in. Got some more souvenirs including Turkish dagger. Cobbers call me the 'Souvenir King'!' He served with this unit for the remainder of the war, but was evacuated to hospital in Cairo in early 1919, suffering from dysentery. Geyle embarked for Australia aboard the 'Karoa' on 8 April 1919, arriving in May. Vincent Geyle died in February 1969.