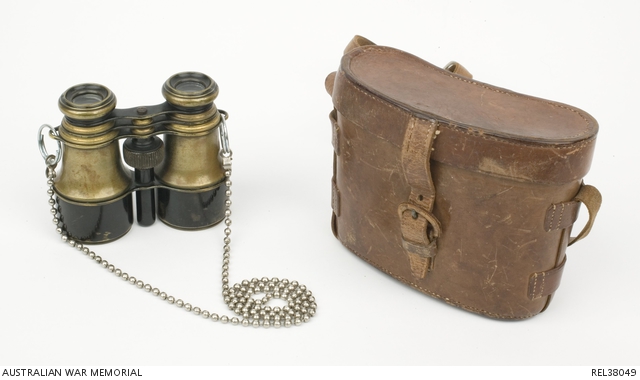 Pair of brass binoculars in leather case. The binoculars have a fixed width but the focus can be adjusted by turning a wheel in the centre which extends the length. The binoculars are stored in a brown leather case lined with red velvet, secured with a leather buckle and carried with a long leather strap. The case also has belt loops on the back. The details of the capture of these binoculars is handwritten on the inside of one side of the case lid reading 'MERS.EL.AHBR 12/7/18' with a signature followed by 'PALESTINE ' and 'TAKEN AT MERS EL AHBR 12/7/18' and another signature. The other side of the case lid has 'Palestine' and '12/7/18'. Pasted inside the bottom of the case is a 'Commercial Bank of Australia' sticker signed 'V.R. Geyle'.

These binoculars were collected by 19138 Trooper Vincent Richard Geyle, 1 Light Horse Field Ambulance, AIF during or after the fighting at Musallabeh on 12 July 1918. The name of the place has been phonectically recorded by Trooper Geyle on the inside of the case. Geyle, a Victorian, was born in 1895 and enlisted in the AIF in July 1917. Sailing from Sydney with Australian Army Medical Corps reinforcements aboard the 'Wiltshire' in February 1918, he spent a lengthy period at Ismailia in Egypt, before transferring to 1 Light Horse Field Ambulance in June. He served with this unit for the remainder of the war, but was evacuated to hospital in Cairo in early 1919, suffering from dysentery. Geyle embarked for Australia aboard the 'Karoa' on 8 April 1919, arriving in May. Vincent Geyle died in February 1969.