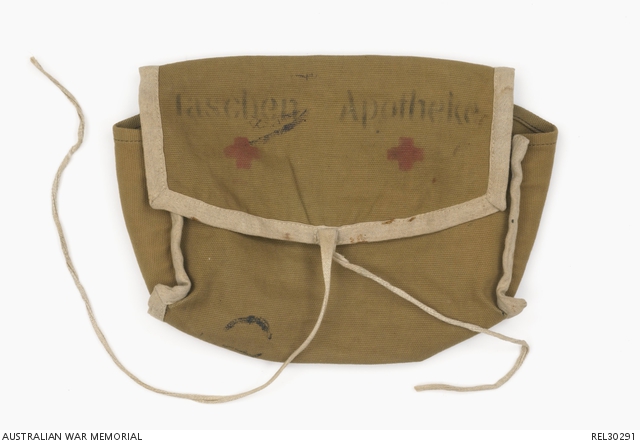 German khaki cotton First Aid pouch, stencilled on the flap with a pair of red crosses, and in black ink, the words 'Taschen Apotheke'. Empty.

Collected by 19138 Trooper Vincent Richard Geyle, 1 Light Horse Field Ambulance, AIF. Geyle, a Victorian, was born in 1895 and enlisted in the AIF in July 1917. Sailing from Sydney with Australian Army Medical Corps reinforcements aboard the 'Wiltshire' in February 1918, he spent a lengthy period at Ismailia in Egypt, before transferring to 1 LH Field Ambulance in June. He served with this unit for the remainder of the war, but was evacuated to hospital in Cairo in early 1919, suffering from dysentery. Geyle returned to Australia aboard the 'Karoa' and was discharged in April of that year. He died in February 1969.