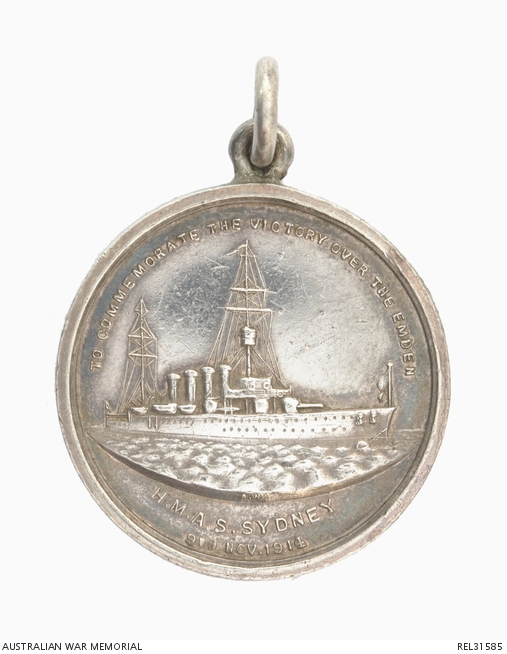 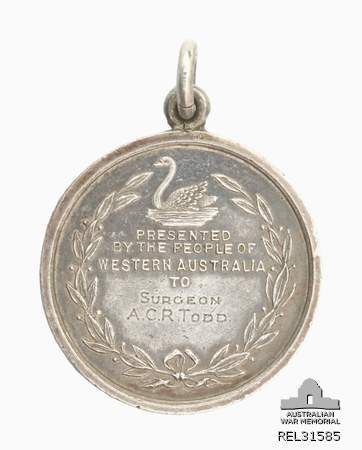 Medal featuring, on the obverse, an image of HMAS Sydney under sail above which are the words 'TO COMMEMMORATE THE VICTORY OVER THE EMDEN' and underneath 'HMAS SYDNEY / 9th Nov 1914'. The designer's initials (AW) appear immediately under the waves. On the reverse is a victory wreath, at the apex of which is a swan over the legend 'PRESENTED / BY THE PEOPLE OF / WESTERN AUSTRALIA TO / SURGEON A C R TODD'. Todd's name is engraved. The medal is provided with a suspension loop.

Presented to Surgeon-Lieutenant Arthur Charles Robert Todd of Tamworth, NSW, one of two surgeons aboard HMAS Sydney during its engagement with the German raider SMS Emden on 9 November 1914.

Of that action, the Official History states that the two surgeons worked continuously 'from 6 pm on Tuesday up to 4.30 am on Wednesday' and returned to the theatre after a short breakfast, tending to both Emden casualties (at least 70) and Sydney wounded for almost 40 hours non-stop.