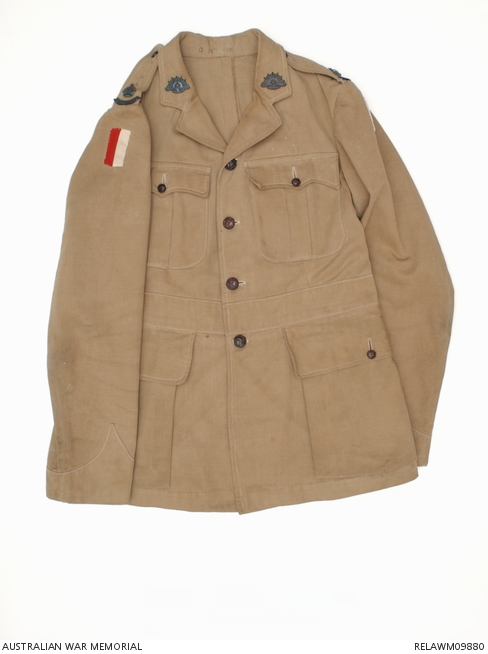 Australian Army officer's khaki cotton drill service dress jacket with oxidised brass rank insignia of major. The single-breasted jacket is secured by four large leather buttons and has an open lapel collar. The pair of patch pockets on the breast are pleated and with a three pointed flap. The lower pair of patch pockets have a plain square flap and expandable sides. All pockets are secured by a small leather button. The brown leather used for the removable buttons has been pressed to imitate plaited leather. The general service collar badges and curved 'AUSTRALIA' shoulder titles are oxidised brass. There are holes in both of the narrow epaulettes, where captain's rank insignia was fitted, indicating that McCrae wore the jacket earlier in his career On both sleeve shoulders is the rectangular white and red colour patch of 60 Battalion AIF. The cuffs are pointed. . The wide sewn in belt has had the clasp removed, before being stitched neatly flush with the opening. The jacket is not lined, but the sleeve seams at the armholes have been covered with binding tape.

Worn by Major Geoffrey Gordon McCrae, 60 Battalion AIF. Geoffery McCrae was born on 1 January 1890. Prior to his enlistment with the AIF on 19 August 1914, he served with the 58th Battalion, Citizens Military Force, and enlisted with the C company 7th battalion AIF on 14 August 1914. He was appointed to captain a few days later, and travelled with the first convoy to Egypt on 6 April 1915. He was 'repeatedly recommended for his good work on the peninsula (Gallipoli)'. He was 'zealous and energetic, and has been instrumental in keeping men going'. McCrae transferred to the 60th Battalion in May 1916, then was promoted to major on the 26 April 1915, while at Gallipoli. He arrived in France (Marseilles) in June and was killed in action at Petillon on 19 July 1916.