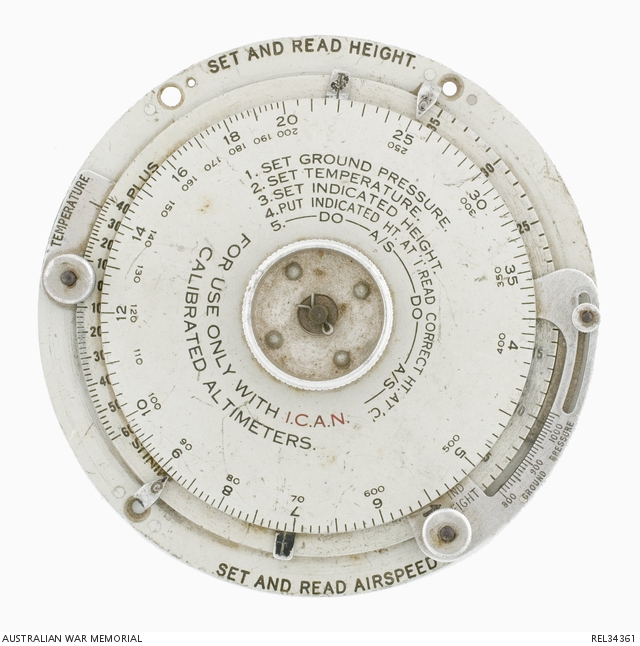 Circular aluminium bodied height and airspeed computer, consisting of three concentric, decreasing diameter calibrated discs laid on top of each other and secured by a central brass pin. There are two additional quarter discs with screw adjusters for setting temperature and ground pressure. An impressed instruction on the front reads ' For use only with I.C.A.N. Calibrated Altimeters'. The reverse is impressed: 'Computor / Height and air speed / Mark II / REF No 6B/131 / Henry Hughes & Sons London / NO 6874/39', with the Air Ministry symbol below. A red length of Dynotape bearing the name 'T.E.W. HOWES' is also affixed to the reverse.

[Full text is available in the attached document] Related to the service of 404900 Thomas Edward White Howes, born 8 August 1922. A clerk of Toowong, Queensland and a Traffic Officer (also notes 'Navigator' and 'Freight Officer') with Qantas Airways, Brisbane, Howes enlisted on 6 December 1940 aged 18. He began training with No 2 Initial Training School (Lindfield, NSW) and was mustered as air crew on 1 January 1941 with the rank of Aircraftsman 2. On completion of this course, and gaining the rank of Leading Aircraftsman, he embarked for overseas training in Canada as part of the Empire Air Training Scheme (EATS), arriving in Canada on 17 April. He attended No 2 Air Observers Course, (Edmonton, 17 April to 8 July) and No 2 Bombing and Gunnery School (Mossbank, 8 July to 20 August), where he gained the rank of corporal and was remustered as an Air Observer on 18 August 1941, when he was also promoted to sergeant. His final course in Canada was No 1 Air Navigation School (at Rivers, from 20 August to 17 September) before he proceeded to Halifax, Nova Scotia, from where he sailed to England for active duty, arriving 27 October. He immediately started conversion to Wellington bombers at Nos 23 and 15 Operational Training Units, completing his training as a navigator on 19 January 1942.

Howes was commissioned as a Flying Officer on 15 March, being assessed as 'an extremely keen & energetic officer of forceful personality.' Assigned to 70 (Wellington) Squadron, RAF, Howes joined them in the Middle East on 24 March 1942. The squadron was equipped with Vickers Wellingtons based at Landing Ground 104 (LG 104) at Qotafiyah, Egypt; Howes' first mission on 28 April was against German supply shipping anchored at Benghazi. With targets ranging from shipping and airfields to road convoys and supply dumps at Martuba, Derna, Tmimi, Gambut and Gazala Wadi, Howes flew 13 night missions through May and June 1942 before a night attack on German transport in the Ras El Kanyis area on the night of 25 June. Having bombed the column of vehicles, Howes' Wellington, piloted by Flight Sergeant Stewart, returned for a number of strafing runs, with the Second Pilot (Sergeant Brown) and Wireless Operator (Sgt Calvert), operating the bomber's two beam guns. They were surprised by an enemy fighter which raked the sides of the aircraft with cannon fire, setting electrics on fire and wounding three of the crew. For his actions in dousing the fires and retrieving the burning rear gunner (Sgt Wagner who had lost a leg), and attending to his crew's wounds with morphia, Flying Officer Howes was awarded the Distinguished Flying Cross. A photograph of the Wellington being retrieved the next day shows sections of the fuselage completely burned through, revealing the geodesic structure. Sgt Wagner later died of his injuries.