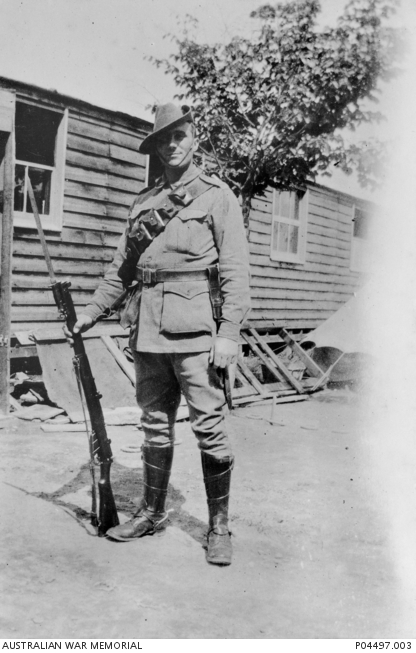 Outdoor portrait of 2278 Trooper (Tpr) Ernest James McCredden, 13th Light Horse Regiment. Tpr McCredden, a farmer from Birchup, Victoria, enlisted in April 1915. He served as a military policeman at Broadmeadows and Seymour, later as Provost Sergeant at the Commonwealth Detention Barracks at Bendigo. He left for service abroad in May 1917, transfering to the 12th Brigade Australian Field Artillery soon after arrival in England. He was killed in action in France on 23 June 1918. He was 28 years old. He was the third of three brothers to die: 290 Private Albert McCredden was killed at Gallipoli in August 1915, aged 25; 2105 Private John McCredden was killed at Messines in July 1917, aged 36.