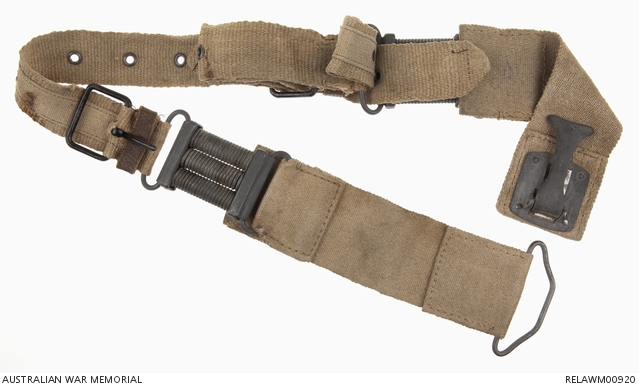 The belt is composed of five (5) elements. There are three fabric elements of coarse cotton webbing, joined by two spring elements. Consider that the belt runs from End A to End B – from the alloy loop to the lever clamp.

Fabric Element 1 is 80 mm wide and approx. 260 mm long. It has a metal clip on the free end and connects to one of the Spring Elements at the other end. The rear of the belt is double thickness where necessary for strength.

Fabric Element 2. Is narrower at 50 mm wide with a line of metal-grommetted belt holes at 50 mm c/c. The length of this section could not be measured as it was bundled up and held in place by a black painted steel buckle at the end close to End B. There is a black painted metal buckle at each end of this segment with a loop of thick patterned brown leatherette is sewn behind each buckle.

Fabric Element 3. Is 80 mm wide and approx. 275 mm long. At the end (End B) there is a large sprung alloy lever clamp held by four rivets to the belt. The base plate is approx. rectangular in shape 65 mm long x 60 mm wide. The metal clip on the end of Fabric Element 1 is held in place by the clamp on Fabric Element 3. The clamp has a quick release lever incorporated into its function. The rear of the belt is double thickness where necessary for strength.

The two Spring Elements are composed of three heavy duty springs approx. 58 mm long between the metal housings. The housings are approx. 60 mm wide 20 mm in breadth and 10 mm in depth. The top surface is bulged to accommodate the black painted metal joining clip.

This belt is not considered to be a pilot’s belt as there are no joining pieces to anchor the belt to the fuselage. It may be an observer’s belt where the belt is attached to the gun ring in order to let the observer/gunner have free access around his cockpit.

Seat safety belt recovered from a German aircraft brought down between Bray and Chipilly on 22 August 1918 and handed over to the Australian War Records Section on 25 September 1918 by Sapper Edward Gaudzinski of 9 Field Company, Australian Engineers [9 FCE]. On the day of the recovery, 9 FCE was engaged in supporting 9 Brigade's assault on the north side of the Somme, against German positions west of Bray. 2 Section moved out with the assaulting troops at Zero Hour (4:45 am), their task to reconnoitre the captured areas for deep dugouts which could be suitable for brigade and battalion headquarters. They were particular in inspecting them for booby traps and mines. The company's war diary notes 'the section had a very rough day, having to pass through a very heavy enemy barrage both going out and coming back. Dugouts discovered were fitted out by Sappers for immediate use as new battalion Headquarters for assaulting battalions, who occupied them at once.'

Edward Gaudzinski, a tailor by trade, was born in Janu, Poland but was residing in Newtown, NSW, with his wife Mabel when he enlisted in the AIF on 16 March 1916 at Rosebery Park, NSW. Assigned service number 9874, he embarked for overseas service aboard HMAT Ajana which departed Sydney on 5 July, landing in England. He crossed to France on 22 November 1916 where he joined 9 FCE. Gaudzinski was wounded by a gunshot to his shoulder and thigh on 7 July 1917 during operations at Messines - one of two sappers from 9 FCE wounded on that day - and transferred to 2 Military Hospital, Canterbury, England for treatment.

He rejoined his unit in France in early June 1918, when they were supporting 9 Brigade operations just outside Villers-Bretonneaux. After participation in the August and September operations (he can be seen in AWM photograph E03066, where he was involved in the building of a dugout at Gressaire Wood for 9th Infantry Brigade Headquarters on 21 August), Edward Gaudzinski returned to Australia aboard the HMAT Armagh in April 1919 and was discharged from service on 20 May.

No single seater fighters were lost in the Bray/Chipilly area on 22 August 1918. However, 33 Battalion (then in the Bray area attacking Happy Valley and the Chalk Pit) note in their Commander's Report for 22 August: 'At 3pm on the 22nd, No 470, L/Cpl W R Jamieson (B Coy), a Lewis Gunner, fired a rifle at a low flying enemy plane and brought it down. The pilot, an officer, was acting as observer and the observer, a corporal, as the pilot. The bullet wounded the Corporal in the foot and struck the engine. On landing both occupants tried to get away but Major C E M Brodziak, OC, B Coy, captured them. The officer expressed very great surprise at being shot down in this manner.' From this description, it is likely that the aircraft belonged to one of the Schlachtstaffelen (battle flights) which were developed in 1917 as air support to ground operations.

Lance Corporal William Robert Jamieson enlisted into the 36th Battalion on 1 December 1915. He was wounded in action on 21 July 1917, attacking enemy strong points on the Warneton Road, duing the Battle of Messines. After recovering from his wounds, Jamieson was transferred to B Company, 33 Battalion in April 1918 and placed in charge of a Lewis Gun section. He was awarded a Military Medal for engaging two German machine guns at Accroche Wood, east of Hamel, on 8 August 1918, capturing them and 24 German personnel. His action in shooting down the German two-seater on 22 August saw him awarded a bar to his MM.

Major Cedric Errol Meyer Brodziak, who chased and captured the two crew members, served with 3 Battalion at Gallipoli. There he was shot in the chin, throat and spine on 27 April 1915. He returned to Australia but re-enlisted in 1916 and was transferred to 3 Machine Gun Battalion, attached to 33 Battalion. He was awarded the DSO for his actions in holding his company's gains on 22 August, but was killed in action at Clery on 31 August 1918.