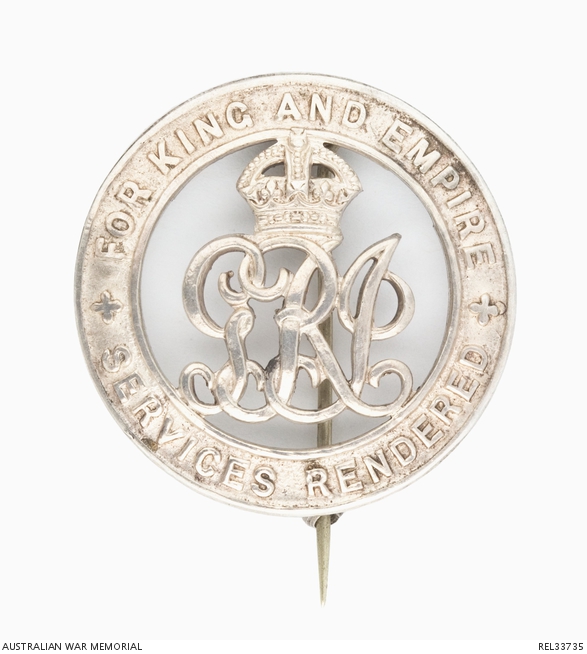 Silver War Badge with impressed serial number 'A84418' on reverse. The badge is circular with the words 'FOR KING AND EMPIRE SERVICES RENDERED' around the rim, and a voided cypher and crown of King George V in the centre. The reverse has a hinged horizontal pin clasp.

This badge was issued to Private (Pte) 7133 John Joseph Monroe, of Redfern, NSW. Pte Monroe enlisted on 9 June 1915 and embarked for service in the Middle East on 9 August 1915. A butcher by trade, he was assigned to 8 Reinforcements, 13 Australian Army Service Corps Butchery. He worked as both a butcher and baker on the Greek Islands of Imbros and Mudros in late 1915 and early 1916. The troops in this area were providing support for the nearby Gallipoli campaign. In February he joined the 1 Light Horse Training Regiment and in March of that year was transferred to the 12 Light Horse Regiment. He served with them until contracting tuberculosis in June 1916, for which he was hospitalised. He continued to serve with the 12 Light Horse Regiment until contracting malaria in July 1919. He embarked for repatriation to Australia aboard HMAT Dongola on 24 July 1919.