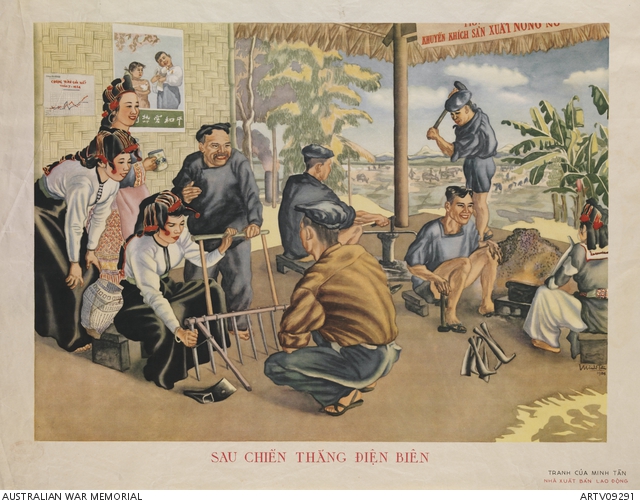 Poster depicting Vietnamese men and women, in traditional costume, working inside a house in the countryside. The poster relates to the victory against the French at Dien Bien Phu in May 1954, which led to the French withdrawal from Vietnam, ending an eight year struggle against the Viet Minh (Vietnamese nationalists). It also refers to planting summer rice after this victory.The banner in the background, on the right, includes text related to the encouragement of agricultural production. During the 1950s and 60s in Vietnam, poster artists often worked in a social-realist style promoted by the state, with art serving propaganda purposes. The most important and patriot subject matter became realistic portraits of peasants, workers and soldiers. Ho Chi Minh, in particular, felt that art must 'speak to the masses' and artists took on a new role, fighting for the struggle for independence and national liberation. The posters were important in an ideological campaign that sought to promote a high regard for labour, collectivism and patriotism, during a period of socialist transformation and cultural revolution in Vietnam.