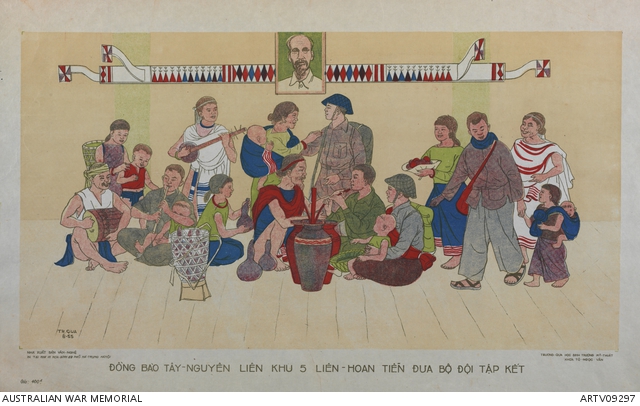 Depicts a group of Vietnamese people, in traditional costume, seated on the floor in a room with several soldiers in uniform. Above them on the wall is a portrait of Ho Chi Minh. The poster relates to the 'national minority people' living in 'Interzone 5' (Lien Khu V) in Vietnam farewelling members of the People's Army. The title of the poster translates as ' In South Central Vietnam the National Minority People of the highest plateaus farewell the People's Army'. During the 1950s and '60s in Vietnam, poster artists often worked in a social-realist style promoted by the state, with art serving propaganda purposes. The most important and patriotic subject matter in posters was realistic portraits of peasants, workers and soldiers. Ho Chi Minh, in particular, felt that art must 'speak to the masses' and artists took on a new role, fighting in the struggle for independence and national liberation. The posters were important in an ideological campaign that sought to promote a high regard for labour, collectivism and patriotism, during a period of socialist transformation and cultural revolution in Vietnam. Many poster artists during this period were encouraged to draw the ethnic minorities living in the highland areas bordering Laos and China. All Vietnamese citizens were to take equal part in the movement for independence.